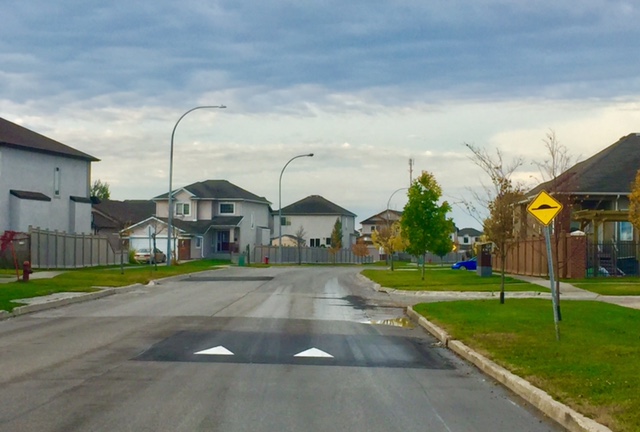 I want to thank the many residents who have provided feedback on the Aldgate Street pilot project. The City of Winnipeg’s transportation engineers are overseeing both the installation and data collection related to this pilot project.  To be clear, they are professionals who work with road infrastructure daily, and I have to trust their experience, education and advice.

Since the initial installation of the speed tables in September, 2016:

To clarify a common question, the speed tables can not be extended across Aldgate as they will impede the flow of emergency vehicles (fire, ambulance, paramedics).  Therefore, they are staggered.

Again, this is a pilot project aimed to reduce traffic speed, keep traffic moving and increase neighbourhood safety. Engineers often state that for a new traffic control device to be effective, it must be in place for at least one  year.

Please see below a table that shows a number of segments along Aldgate where a percentage of motorists travel in excess of 55 km/h.  The Department considers “speeding” as having over 15% of motorists travelling at or higher than 55 km/h.  The Department will be collecting speed data again (as well as other information regarding driver behaviour) to see if and to what degree these speed tables have made an impact on speeds.

As this is a pilot project, we will be adjusting elements that could help encourage drivers to reduce their speeds and/or discourage undesirable behaviour.  If by Fall, 2017, we have not been able to achieve the primary goal of these devices (i.e. to help reduce speeds to an acceptable level), then we would look at re-designing or considering other traffic calming devices.

To all residents who use Aldgate, I appreciate your feedback and welcome your comments.  Please E-Mail jlukes@winnipeg.ca.  We are sharing residents’ questions and comments with the City’s engineers and are meeting monthly to discuss the project.

River Park South is a thriving residential community that is growing rapidly – homes are continuing to be built and new families are moving in.  Located in the south end of River Park South, Aldgate Road collects residential traffic and directs it to the regional roads network (St. Mary’s Road, St. Anne’s Road, and Dakota Street).  Aldgate is designed to accommodate transit buses and emergency vehicles, and is the primary ‘East–West’ connection for vehicles in south Winnipeg.

TRAFFIC IN A GROWING COMMUNITY

As the community grows, so does the volume of traffic. Over the past two years, I’ve received multiple enquiries with concerns requesting:

To address these concerns, I initiated the following:

Speed tables are constructed of asphalt, are painted and signed, and are alternated in opposite directions on the street. Speed tables physically change the street conditions, yet maintain a constant flow of traffic, as shown below: 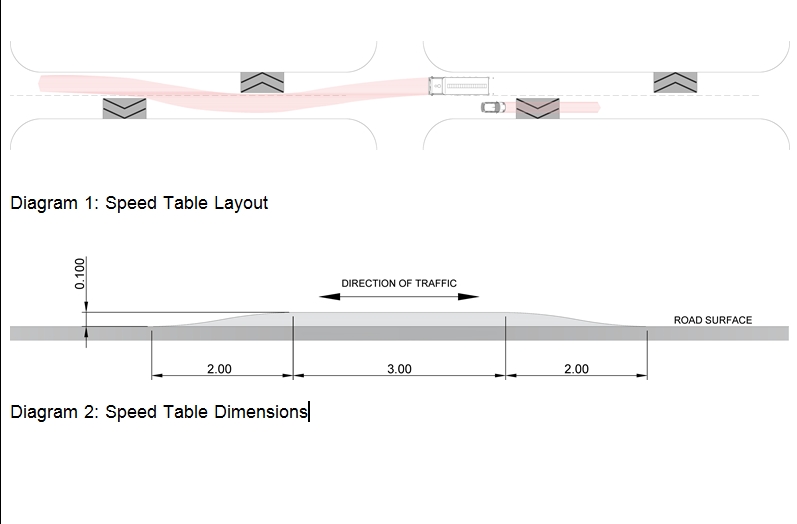 Changing the built environment is a more sustainable approach to traffic calming as less enforcement by Winnipeg Police Service is required, traffic flow is maintained, and fuel is conserved vs having multiple stop signs installed. A bonus result of reducing speed enables improved conditions for pedestrian crossings. Speed tables can be installed on collector streets as they do not negatively impact emergency vehicles and transit buses, and stand up well to winter snow clearing operations.

There will be six speed tables constructed in the following areas, as part of this pilot project:

A map with the six speedtables on Aldgate is shown below (click on the map to increase its size): 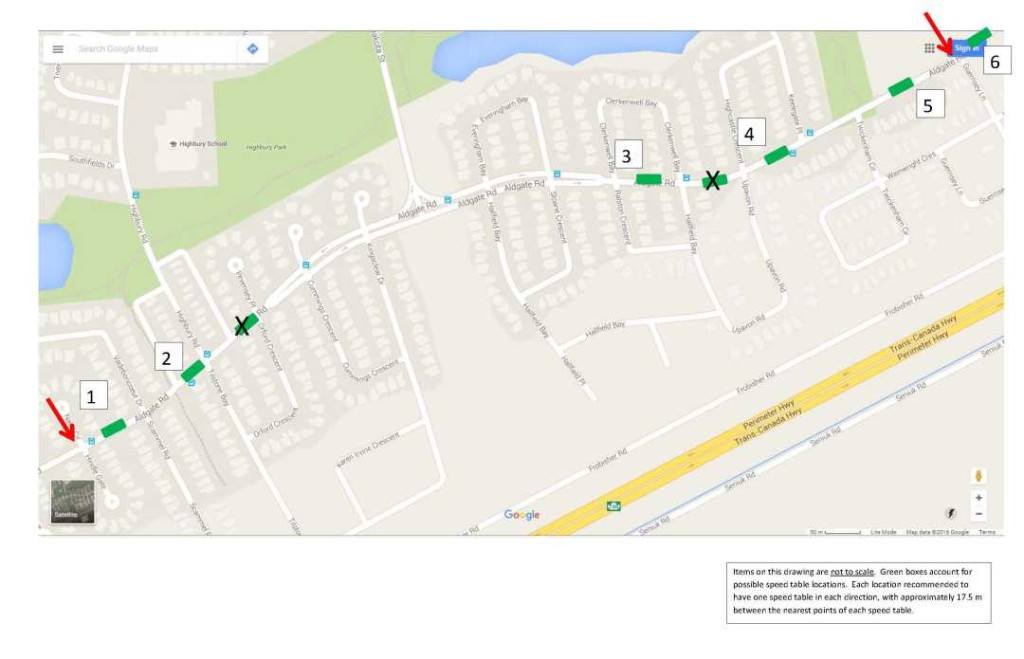 YOUR FEEDBACK ON THIS PILOT PROJECT

I want to hear your feedback on the speed tables. I recognize this is a change, and not all folks will be in agreement with change, but I ask that you acknowledge this is a pilot project with the overall goal to  improve the community we live in. Do you think speed tables are an effective traffic calming approach? Is the installation of speed tables improving the conditions for pedestrian crossings on Aldgate?  How effective do you think the crossings are in the winter? Do you notice any change in traffic flow?  PLEASE contact me and share your feedback at:  jlukes@winnipeg.ca