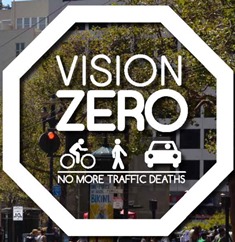 Vision zero forum to be hosted in Winnipeg

Sometimes vehicles hit people, and sometimes those people are either badly injured or killed—but it doesn’t have to be that way, according to one local expert who will speak on a road safety panel in Winnipeg on January 30. 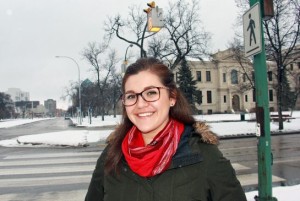 Rebecca Peterniak, a Winnipeg-based road-safety specialist, said Vision Zero cities accept road safety issues as nothing less than a “health epidemic,” and then address them accordingly through a proactive approach.  (Braeden Jones, Metro)

It may seem farfetched, given the innate fallibility of all road users, but Peterniak said that’s old-school thinking.

“It’s the responsibility of transportation system providers to allow for that error and build a road system that (minimizes) the outcome of mistakes so they don’t result in people dying,” she said.

“Basically, wherever people might fail, the road system shouldn’t.”

That sentiment is at the core of Vision Zero, a road safety concept from Sweden that takes a zero tolerance approach to traffic deaths, effectively cutting them by half since the late ‘90s.

Peterniak has authored two papers on Vision Zero and held a workshop on the subject at the 2016 Canadian Institute of Transportation Engineers (ITE) Conference in June.

She said Vision Zero cities accept road safety issues as nothing less than a “health epidemic,” and then addresses them accordingly through a proactive approach.

“How you’re building your roads, maintaining your roads, what types of modes of transportation are prioritized… how you’re protecting (vulnerable users)… there are a lot of things you can do for road safety,” she said.

“There is always more that can be done.”

The Canadian Council of Motor Transport Administrators (CCMTA) worked Vision Zero ideals into Canada’s Road Safety Strategy 2025 in January 2016, which Peterniak said provided a “framework municipalities can use to develop their own strategies locally.”

Major Canadian cities including Ottawa, Edmonton and Vancouver have all since publicly attached their own safety strategies to Vision Zero, but each still has work to do.

“Adoption is the first phase … that comes with developing a policy statement to say, ‘we support this vision,’ but implementation is later, that’s what it looks like in practice.”

The implementation part is where Vision Zero really starts to matter, according to Vision Zero Canada’s executive director, Graham Larkin, who cautions against claiming Vision Zero sympathy to be “trendy” without really investing in the goal.

“Nobody wants traffic deaths, we all want to eliminate them, the question is: ‘Are we willing to go big and make the necessary changes?’” Larkin said.

He explained those necessary changes in a Vision Zero city would mean “civic officials taking responsibility for road safety, putting the onus on themselves, and using proven methods to establish fail-safe systems.”

Larkin said the status quo of most cities is relying on education, engineering and enforcement, pillars that survive in a shift to Vision Zero thinking, but in totally new ways.

“Engineering for one tends to come from this old fashioned idea that roads are devoted to level of service, throughput for cars,” he said.

“I’d rather talk about design, that’s sort of a more suitable term for describing what is basically the street as the best possible interface for all of the different users.”

Separating vulnerable users from cars, “clever signalization like advanced green for bikes,” pedestrian-initiated cross-walks, lower speeds, traffic-calming measures like speed humps and other innovations that are “compromises” that may irritate some drivers, Larkin said–but it won’t kill them.

He said the great part about Vision Zero is that in Europe, where the concept took hold decades ago now, it’s already proven, meaning Canadian cities needn’t reinvent the wheel.

“Just emulate the world leaders, do what they do, I’m talking about Sweden, Denmark… If you’re Winnipeg, it’s reasonable to look at those places,” he said.

“Go with proven data-driven methods, don’t do what you think is politically expedient so you can sell it to voters… we don’t need to do that.”

Peterniak will present her thoughts on the progressive approach at a public forum and panel discussion Coun. Janice Lukes has planned for January 30 at the Millennium Library.

She said it’s too early to tell what kind of support Vision Zero could have in Winnipeg, among its citizenry or leaders, but regardless it’s “encouraging” the discussion has started.

“I hope it will lead to action, road injuries and deaths are preventable so the more we get together and talk about it, the closer we get to that end.”