Your Safety on the South Perimeter Highway 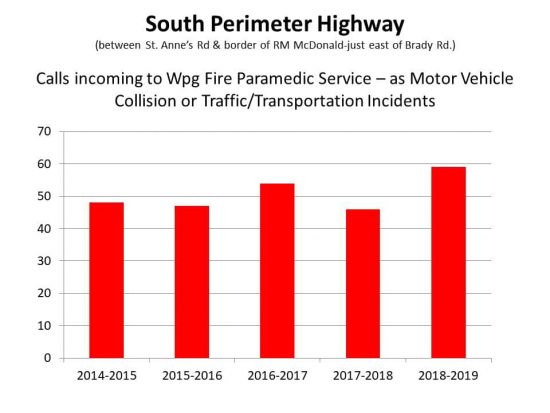 A 19 yr old young man died yesterday at the intersection of Brady Rd and the Perimeter Highway (Hwy) – in the same general location where at least three other deaths have occurred in the last 5 years. Tragically, some of you know the utter devastation, loss and incredible life altering pain the families and friends of this young man are experiencing. Words can barely express the heartfelt sympathy I and many others extend to his loved ones. https://winnipeg.ctvnews.ca/collision-on-south-perimeter-hi…

Over the last 8 years South Winnipeg has grown at twice the projected rate. Tens of thousands of residents have moved into brand new communities – Sage Creek, River Park South, the Neighbourhoods of Bridgwater, South Pointe and Prairie Pointe. Many have also left the City moving to La Salle and now use the Perimeter Hwy to commute to jobs in Winnipeg.

· Many residents chose to use the Perimeter Hwy (a national trade corridor) instead of using the very congested Kenaston/Bishop Grandin Blvds (a regional road) to travel east & west. Residents jump in the car with the kids and use the Perimeter to zip to St Vital Mall, or to Costco, or to the University and other destinations.

The Perimeter Highway is a national trade corridor with tractor trailers, transportation trucks and more travelling at speeds of 100km/h. They are very focused on travelling across Canada to get to their destinations of Vancouver, Toronto and other large cities.

Just this week the Manitoba government updated requirements for the recruitment of international long-haul truck drivers to ensure the safety of Manitobans – triggered in part by the Humboldt tragedy. Not all Provinces have done this. https://news.gov.mb.ca/news/index.html…

Your odds of survival in a collision with a tractor trailer – or any vehicle travelling at 100 km/h are – not good.

The Federal, Provincial and City are investing millions of infrastructure funding into the development of Centre Port Canada (https://www.centreportcanada.ca/) Centre Port Canada is a global multi-modal transportation hub with trucking as a huge component. More and more tractor trailers are travelling from the United States and across Canada and are using the Perimeter Hwy to access Centre Port Canada.

The Perimeter averages in some parts, 30,000 vehicles a day. Traffic volumes increasing rapidly – see the attached images that show the forecasted traffic volumes almost doubling for the South Perimeter over the next 30 years.

See attached slide from WFPS – with data identifying the number and general location of collisions or incidents that Winnipeg Fire Paramedic Service responded to on the Perimeter Hwy.

· I did not get a breakdown of the type of each collisions or incidents – but feel confident in assuring you they were serious – and the WFPS trucks and ambulances were not attending to a cat stuck in a tree or something similar.

The south section of the Perimeter Hwy was constructed in 1955 – using 1950’s or earlier – engineering standards.

The Perimeter Hwy is a provincially owned and maintained road. Short and long term improvements are underway – some improvements occurred this summer.

LONG TERM: See: https://www.gov.mb.ca/mit/hpd/pth100/studies.html with lots of info on the left side bar

I travel sections of the Perimeter daily to access neighbourhoods in the Waverley West ward. I live very near to the Perimeter and see hundreds of vehicles come to a standstill – regularly – because of collisions on the Perimeter.

I have three 17 yr olds who seem to ‘know everything’ when it comes to driving – as so many young males do! And, just like the families of that young 19 yr old – I lost my dad in a collision, and our lives changed forever.

I hope you don’t take this as ‘fear mongering’ – these are facts for your consideration when using the Perimeter. Please use extreme caution.

Please send encouraging emails to your Provincial MLA’s to keep working on the improvements.