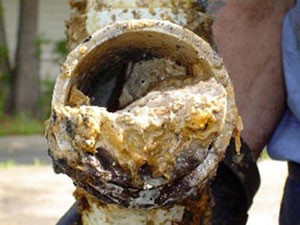 I’m receiving calls from resident’s who’ve had sewer backups into their basements. The Water and Waste department is advising the residents it is because drains are blocked with grease.

You know those delicious, high-fat, deep fried meals are bad for your arteries – but did you also know that fat, lard, oil  and grease is also bad for your drainage system?  Clogged drainage systems can look a lot like the clogged arteries of someone who’s spent too much time enjoying fried chicken, jalebi, chaats, spring rolls or French fries!  And just like your arteries, eventually things will stop flowing properly through your home and the City’s  drainage pipes.

When you pour hot grease down your drain, the grease sticks to the inside of the pipe.  Eventually, the pipes and grease will cool causing the grease to stick to pipe’s surfaces.  It may take a while, but slowly and surely, grease will block up your entire pipe, and blockages will occur. The blockage may occur in your house pipes or it may occur in the pipes connecting to the main sewer line. There is a misconception  that running hot water down the drain can alleviate the problem but this is not accurate.

HOW to DISPOSE of GREASE & COOKING OILS

Allow the cooking oil or grease to cool off before you do anything with it.

Over the past two years I know of four separate incidents of blocked drains. Please dispose of your grease responsibly. Thank you !