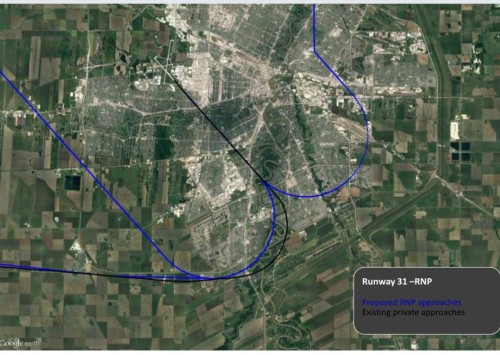 NAV CANADA is currently seeking feedback on proposed changes to aircraft flight paths which could see over 2,000 flights being re-directed over St. Norbert, the Red River and Fort Richmond area.  This NAV CANADA Powerpoint as well as the You Tube video summarizes the proposed changes.

A community open house in March is your opportunity to provide feedback:

Updates to standard arrival routes as well as the implementation of new technologies are planned as part of the proposal. The proposed flight paths are estimated to save up to three minutes flying time for arrivals, with greenhouse gas emissions reductions estimated at 800 metric tonnes each year.

Nav Canada is changing its approach and is looking for feedback from the community.

The air navigation service provider is proposing changes to some flight paths in Winnipeg’s airspace as more planes are outfitted with technology that reduces flight times and allows for more efficient arrivals.

Jonathan Bragg, a spokesman with Nav Canada, explained that as airline operators, such as WestJet and Air Canada, add new planes to their fleet, some will be equipped with Required Navigation Performance (RNP) technology, a type of satellite positioning or GPS for planes. About 20 per cent of aircraft have the technology on board today.

“A plane flies parallel to the runway before turning towards the airport on final approach,” Bragg said. “What RNP allows us to do is turn a little (sooner). That means we’re flying less distance and it takes less time.

“This is much more repeatable and predictable than standard arrival routes,” he said.

Compared to arrival routes used today, RNP will cut about three minutes off of flight times and 800 metric tonnes of greenhouse gas per 1,000 flights, Bragg said.

As the technology comes into use, more planes will be turning towards the airport at points closer to the south Perimeter near the neighbourhoods of St. Norbert, Bridgwater, and South Pointe.

Planes turning over the southwest side of the city primarily land on runway 31, which handles approximately 750 arrivals a year, and runway 36, which has over 1,000 planes land a year.

Bragg said residents living beneath the proposed RNP flight paths will notice only a small change in the number of planes flying overhead and about two per cent of total arrivals would follow that path. Overall, the volume of planes handled by the airport won’t change because of the new RNP flight paths.

Terrence Ferguson, manager of Nav Canada’s Winnipeg tower and terminal operations, adds that on days with a high number of flights coming into Winnipeg, even those with RNP technology may be directed to follow the standard approach.

“If we have a lot of aircraft doing the same type approach, we might still be taking (pilots) out 10 miles, so you’re not guaranteed that everyone will be on that track,” Ferguson said.

According to Bragg, RNP technology allows a plane to take a quieter, continuous descent into the city because it is idling as it arrives. For the most part, arrival altitudes will remain constant.

“It’s burning less fuel, producing less pollution and making less noise,” Bragg said. “Because of some of the constant descent, aircraft at certain places are higher up as they’re descending.”

Unfortunately for people living in River Heights and near Assiniboine Park, the points at which planes are lowest and most noticeable as they approach the airport, nothing will change.

Nav Canada will host a public information session on Sat., March 18 from 1 to 3 p.m. at the Four Points by Sheraton Winnipeg South (2935 Pembina Hwy.) to get feedback from the community. Experts will be on hand to explain what the changes mean and residents will be able to see how the flight paths might affect their home directly.

“This type of airspace change is happening around the country and Nav Canada wants to be a good neighbour,” Bragg said. “Once we get the feedback we read it and analyze it…  and all that information is put into a public engagement report where we respond to the information provided.”

For more information and to see the proposed changes go to navcanada.ca/EN/about-us/Pages/CYWG.aspx