Community Festivals And Food For Those In Need 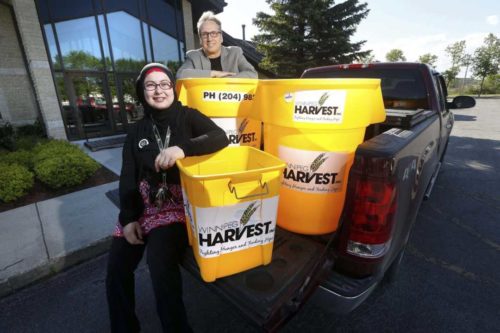 This Saturday, June 23rd is a VERY special day in South Winnipeg. Two very giving communities, our Mormon and Muslim friends – are BOTH holding Festivals and are BOTH holding a Food Drive for Winnipeg Harvest! Let’s help them help those in need. Please consider bringing a food donation to each or both of the festivals and take in the celebrations! Both Festivals are open to the community!! I’m really honoured to know both Lubna and Rocky and greatly appreciate the leadership, dedication and commitment they provide to our entire community. BRAVO and I will see you at BOTH events with my contributions in tow! Come and enjoy the celebrations!

*Food donations will be accepted at both events.

Thank you to the Winnipeg Free Press

Sometimes the best interfaith connections are made over food, and that’s why the city’s Muslims and Mormons plan to collect and sort groceries together.

Next week, members of the Manitoba Islamic Association (MIA) join the 13th annual food drive for Winnipeg Harvest organized by the Church of Jesus Christ of Latter-day Saints, known also as Mormons.

“We’re trying to do some good in the community and doing it together is much better,” says Richard Baronins, one of the Mormon food drive co-ordinators.

Expected to leverage about 68,000 kilograms of food for Winnipeg Harvest through matching donations, this first-ever interfaith food drive occurs on Saturday, June 23, a week after the conclusion of Ramadan, the 30 days during which Muslims fast, pray and contribute to charities.

“People are even more charitable during Ramadan,” says Lubna Usmani, MIA’s program and events co-ordinator. “Charity is one of the five pillars of our religion and it’s important to be charitable all the time.”

“We feel the same way Muslims do,” adds Baronins, a volunteer leader at the Church of Jesus Christ of Latter-day Saints on Dalhousie Drive.

“Community service is really important for us.”

Volunteers from both the Mormon and Muslim communities will drop off marked grocery bags and information about the food drive to 60,000 Winnipeg households next week.

On Saturday, June 23, hundreds of volunteers will drive up and down those same city streets from 9 a.m. until noon to pick the full grocery bags and transport them to their churches for sorting and storing in large trailers, Baronins says.

Food contributions will be matched by Safeway/Sobeys/IGA and Peak of the Market, tripling the effect of each donated item. Baronins says the church headquarters also contributed $42,000 to purchase more food for Winnipeg Harvest.

Baronins and Usmani hope the food drive builds some connections and understanding between their faith traditions, and they admit they don’t know much about each other.

“This is our first partnership and we hope there will be more,” Baronins says.

Co-operating with the Mormons on the food drive helps form relationships and shared experiences, Usmani adds.

“This way, we can meet our neighbours and work together,” she says.

The groups already have some commonalities. Both are relatively small, with about 4,500 Mormons in Manitoba and an estimated 15,000 to 20,000 Muslims in the province.

Muslims fast during the holy month of Ramadan, and Mormons fast for 24 hours each month, and contribute the money they would have spent on food to a fund to help people in need. And both groups are holding neighbourhood festivals on Saturday, June 23. The Mormon street festival runs from 1 to 5 p.m. at 45 Dalhousie Dr. Muslims run a family Eid festival from 3 to 10 p.m. at Grand Mosque, 2445 Waverley St. Food donations will be accepted at both events.