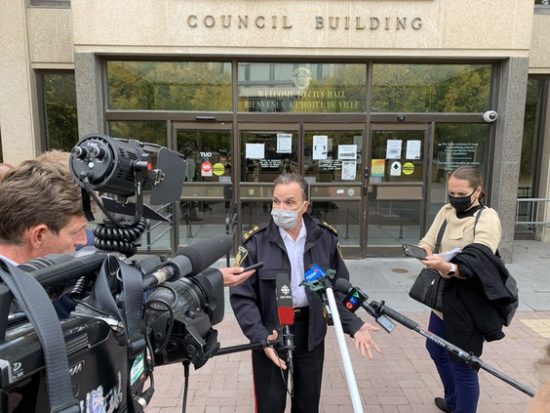 Thank you Winnipeg Sun and reporter Josh Aldrich for this interesting article on crime trends. According to Winnipeg Police Services:

Data is important. To help the Winnipeg Police Service, please ensure you protect your property and report ALL suspicious activity.

If you listen to recent comments by several city councillors, Winnipeg has turned an ugly corner, violent crimes are increasing and we are doing nothing to stop it.This was combined with continued calls to defund the police by local academics last week.

We need to all pump the brakes just a little bit.

This is not at all to downplay the levels of crime in the city or the impacts on victims and the immense social issues the city is grappling with. These are issues of grave concern.

But we are not about to drop into some unprecedented abyss here.

First of all, there is no such increase in violent crime. On the contrary, there has been a drop in most categories of violent crime and even property crime.

It’s not a complete turning of the tide, but trends have the city improving on these critical numbers.

This effectively covers the first year of the pandemic, but Winnipeg Police Chief Danny Smyth was not about to chalk this up to a silver lining of COVID-19.

“We’re still higher than the national average, but we’re not getting worse,” he said. “What I am seeing this year and throughout the pandemic is we’ve actually come down modestly in most categories.” 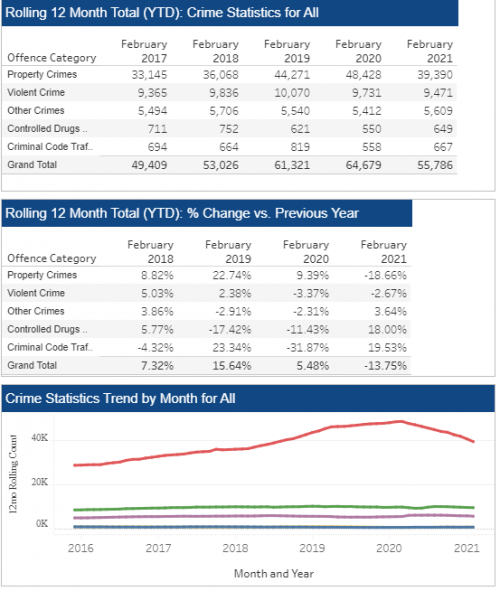 The rolling 12 month year over year stats show a decrease in violent crime in Winnipeg. Data from Winnipeg Police Services

Instead, he looks at the dent the police have made in their investigation practices and the progress they have made on gang activity. Even homicides decreased from a high of 44 in 2019 to 40 in 2020.

One area where they are seeing increases is in assaults with a weapon, which spiked by 24.9% over last year.

“It’s hard to say it’s pandemic related. Certainly, we are all feeling frustrated and cranky and I certainly think that plays out in the field,” said Smyth. “I think that could be driving some of the narratives at city hall.”

He said Winnipeg is a little different than, say, Toronto where the bulk of their illegal weapons flow across the border from the U.S. We get some of that here, but the chief also said they see more guns acquired through other means like from robberies, legal gun owners selling illegally and now more people making them in their homes.

To help counter this and track these weapons better, they have spent the last three years developing their own firearm ballistics system and have integrated with the U.S. to trace guns across the continent.

“It is certainly illustrated to us how fluid some of these weapons move about the continent,” said Smyth.

Councillors have also called recently for solutions to bus shelters being used as homeless shelters, especially during the coldest months of the year as transit use plummeted during the pandemic.

Smyth said this has been a big concern for the WPS and they have called in other partners in the community to help them in these situations. His own officers have experienced first hand how “horrific” some of these situations are and how tricky they can be to respond to, referencing one officer who was recently stabbed with a needle on a call.

The other area which remains a big concern for the police is meth and fentanyl. It was often cited as one of the main contributing factors to a lot of the violent crime in the city pre-pandemic and it remains so, even if COVID-19 shifted it out of the headlines. The Canadian Mental Health Association and other organizations have talked at length about the impact of the pandemic on mental health and addiction issues.

He does bristle, however, at the insistence of groups that continue to call for a defunding of the police. The groups often point to the $300 million WPS budget and argue for those funds to be shifted to social services. On Thursday, Smyth argued between health care, education and families other departments, the province alone already has more than $14 billion earmarked for different social services and perhaps there should be a realignment of funding at the provincial level for these issues.

“The money is there, it just needs to be better coordinated,” said Smyth. “The path forward is for us to partner with the agencies that are providing some of the services, because sometimes, quite frankly, they need us to be able to do their jobs.”

The reality is, Winnipeg does have a violent crime problem. No one denies it. Anybody who lives in the city can see it, whether they read the paper, hear the stories or experience it one way or the other first hand.

To say, as Coun. Kevin Klein did on May 5 that, “We have to admit the fact we have a problem and stop ignoring it,” does not do justice to the work that is being done. He was referring to priorities at the city council level, then he should make it a priority and get it on the agenda for the Executive Policy Committee.

Just because you are seeing an uptick in crime in more well-to-do areas does not mean the city is going to hell in a violent handbasket. These issues have been long-standing and unfortunate.

It does underscore a need for vigilance by the community at large, to report suspicious activity and for continued efforts to address the root issues of crime, not just pointing a long finger at police.