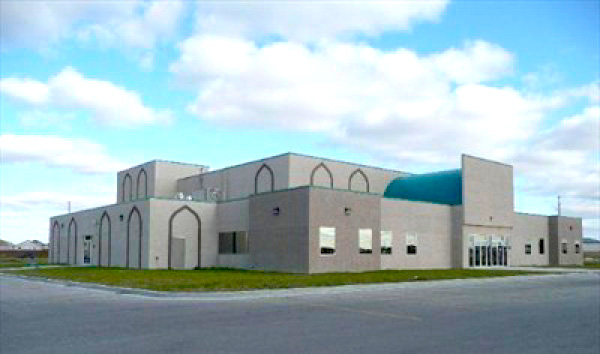 Since being elected Councillor of the South Winnipeg-St. Norbert in 2014, I’ve been working closely with Dr. Idris Elbakri and the Manitoba Islamic Association, and attended many wonderful community events in the beautiful mosque at 2444 Waverley Street!  To learn more about MIA and their upcoming events, please visit:  http://www.miaonline.org/

My thanks to the Winnipeg Free Press for their article.

“As Canadian as a hockey rink.” That’s the way Idris Elbakri, president of the Manitoba Islamic Association, hopes people in Manitoba will one day view mosques in this province.

Elbakri, 41, is in the last year of his term as the association’s president. He recently published his hopes for the Muslim community in Manitoba.

“To many of us the mosques are like a second home, and like our homes, in the mosques we seek to preserve the cultures and practices of our countries of origin,” he wrote.

“While this may give us some emotional comfort, it is counterproductive and it contributes to the alienation of many. The mosque must feel as Canadian as the hockey rink.”

In an interview, Elbakri, a medical physicist at CancerCare Manitoba, elaborated further about how he looks “forward to a day when non-Muslims in need of peace, quiet, reflection and prayer feel just as comfortable going into a mosque as they do going into a church, that it won’t feel foreign or awkward.”

One way local Muslims are trying to accomplish that is by holding open houses at mosques. But, he said, more needs to be done.

“If our faith is not rooted in its local culture and history, it will not survive past the waves of immigration,” he said.

What makes that challenging is that there are so many newcomers every year — more than 1,000 people from Syria in the last 12 months alone. For these many new Canadians, adjusting to a new country is hard; the mosque is the one place where things feel familiar, just like back home.

As an immigrant himself, Elbakri understands the desire to have something familiar when people go to worship. The problem is that while it feels like home for Muslims, it can feel very foreign to other Canadians.

And how will they do that? For Elbakri, it means figuring out “what our core values are, versus those that are more cultural.”

With as many as 80 different nationalities represented in the community, and with so many newcomers arriving each year, this is a big task. But two areas where it can begin are the role of women, and use of English or French for sermons, he said.

When it comes to women, “there is a lot of cultural baggage,” he stated, noting the Prophet “was always giving women space.”

As for the language issue, “What good is it (a sermon) if it can’t be understood by everyone?”

One thing that he can’t see changing is the prayers — they will always be in Arabic.

“(Arabic) is the universal language of prayer for Muslims,” he said. “It means I can go to a mosque in any country and the prayers will be the same. It creates a global sense of unity.”

What about terrorism — how will the community deal with that?

“Most of the Muslim world is peaceful,” he said with a sigh. “It only makes the news when violence happens. That is unfortunate.”

He looks forward to the day when the Muslim community isn’t defined by terrorism, or feel it constantly has to respond to terrorist acts.

“When something bad happens, we condemn it, again and again and again,” he said. “I don’t want condemning violence to become a way of life for us, to define us as a community.”

Instead, he said, he hopes Manitoba Muslims are known for “the positive aspects of our community, worship, faith, by our efforts to serve anyone in need.”

Muslims in Manitoba have come a long way since the first mosque was opened in 1976. It has survived and thrived despite the challenges and fallout from of 9/11 and other negative aspects of terrorism. Yet for Elbakri, there is still room for growth.

“We have a lot to learn about finding a place in this country and culture,” he said. If they don’t succeed, Islam could always be seen as “an alien implant.” And it that happens, “We will have failed our most precious mission and role in life, which is to share the beauty of Islam with everyone around us.”