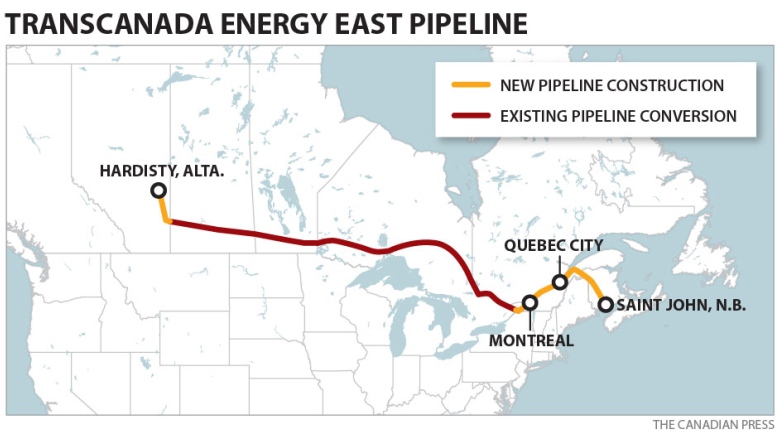 Pipeline experts were in Winnipeg Tuesday to answer questions about a controversial line that would snake from the oilsands, through the prairies and terminate on the East Coast.

TransCanada’s 4,600-kilomtre Energy East pipeline would use a network of new and repurposed pipelines to send crude oil from Hardisty, Alta., east to Saint John, N.B.

Details of the project were on display Tuesday night at St. Norbert Community Centre. Members of the public were invited to ask questions of people like Tim Duboyce, TransCanada’s spokesperson for the project.

Vicki Poirier teaches at a school in the area and is a supporter of the project.

“For now everybody needs the oil, might as well move it safely,” she said. “A pipeline is way safer than a tippy train.”

If the plans were to gain approval, a pre-existing natural gas pipeline that runs east-west across southern Manitoba would be incorporated and reused for transporting oil.

Duboyce said that in all of the interactions the company has had with Canadians in various provinces, safety has been the number one concern. 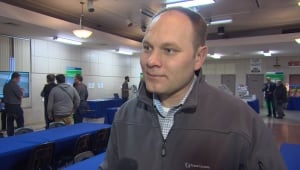 Duboyce said if the project is given the green light, TransCanada intends to employ highly trained staff to monitor the pipelines around the clock from a high-tech control centre.

Janice Lukes, councillor for South Winnipeg–St. Nortbert, attended the open house. She said she was impressed with how modernized and robust the safety measures are for such projects compared to the way they used to be.

“Compared to the safety [measures] that [have] been done in the past, I think this is the most obviously modern, newest technology from a safety aspect,” Lukes said, adding she spent three hours at the open house trying to learn more about the risks of the project.

“I really got a lot of confidence and comfort in listening to our local folks…. To hear the interaction and communication and procedures that are being set up, it was very interesting to see it all coming together.”

‘The aqueduct and the landfill’

Lukes isn’t without her concerns, however.

Alex Paterson, the spokesperson for Manitoba Energy, shared some of the same concerns as Lukes.

He came to check out the interactive displays on hand and to ask questions about the possibility of ruptures.

“My biggest concern is the proximity of the pipeline to the Winnipeg aqueduct,” said Paterson.

“Not only does it travel two metres below, but it is within the spill reach along the creeks and rivers.”

The display will travel around Ontario before making its way back to Manitoba for an open house in the Whiteshell.