If Albertan Cities Do It, So Can We! 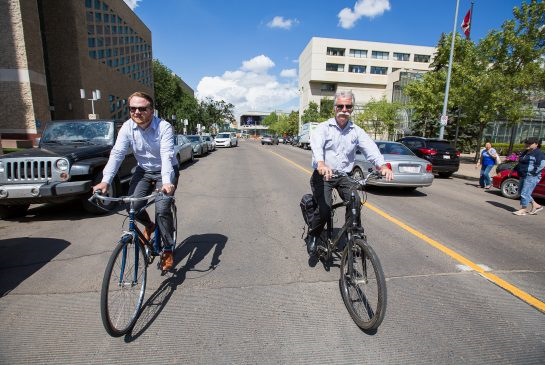 For  ALL the details of this event, please visit FORUM: Fast Tracking a Downtown Cycling Grid on my website.  Please join me on October 18!

My thanks to Winnipeg Metro News for covering this story.

Calgary did it, Edmonton is doing it, could Winnipeg do it? Weigh in at next week’s forum at the Millennium Library.

The idea of putting bike lanes in the fast lane in Winnipeg is gaining momentum.

Spurred by Coun. Janice Lukes – who spent years as an active transportation advocate before taking a seat at the council table – quiet rumblings about our western neighbours’ lead have turned into a louder conversation.

On Oct. 18, Lukes is hosting a public forum at the Millennium Library on the subject of “fast tracking a downtown cycling grid in Winnipeg.”

Lukes explained the idea really took hold for her as she learned more about Calgary’s protected bike lane network—which doubled the percentage of Calgarians commuting to work by bike with a complete 6.5-km network installed in 2015.

Earlier this month, councillors in Edmonton unanimously supported adding 7 km of temporary bike lanes to their downtown to pilot the idea and follow suit.

“I think we can totally do that,” Lukes said. “Now is the time we should be looking at doing it.”

To get the conversation going in an informed manner, she has invited experts from both of Alberta’s minimum-grid-embracing cities to speak on a panel at next week’s forum.

Golly said the concept of a minimum grid of connected downtown bike paths is being actualized across North America, though not always fast-tracked.

“Some (cities) aren’t rolling it out in one fell swoop… many cities incrementally built a network downtown in their central cores,” he said.

In Winnipeg, existing walking and cycling strategies show a grid-like system eventually materializing—but there’s a chicken-or-egg conundrum that pushes the speed of that build-out down the budgetary ladder of priority.

“The Edmonton approach is using low-cost, adaptable materials to prove-out the network and to be able to tweak it as it’s operating,” he said. “Consultation will be principally done through engaging with the infrastructure that’s in place.”

In Calgary, execution of a similar plan exemplified the ‘build it and they will come’ adage.

But Golly said no two cities are the same and there is no “copy, paste” approach that will work everywhere.

“A lot of it is based on where the community is at, where public opinion is. It’s not such a simple thing,” he said.

Edmonton, not unlike Winnipeg, was following a road renewal schedule and adding lanes during construction incrementally.

“We had a very small budget and were trying to cobble together a network, and that became disjointed for us… it led to a lot of backlash, and a refocusing and investment that allows it to happen (fast-tracked),” Golly said.

He added that community advocacy groups, post-secondary institutions and the private sector being behind the plan was also “critical.”

“It provided a lot of strength and support for city council to put behind the bike grid,” he said.

So the recipe to fast-tracking a minimum grid is a plan, advocacy, political will, public support and “folks from all different backgrounds and perspectives coming together for a common cause,” Golly said.

Winnipeg could be close. Local bike advocates Bike Winnipeg support a minimum-grid whole-heartedly. There are just a few pieces of the puzzle missing, namely a groundswell of support amongst Winnipeggers and in city hall.

Depending on what people think after Lukes’ forum, that may change—and then Winnipeg might, too.

“It’s an exciting time for people to be involved in the discussion because it will shape their city, for sure,” Golly said.