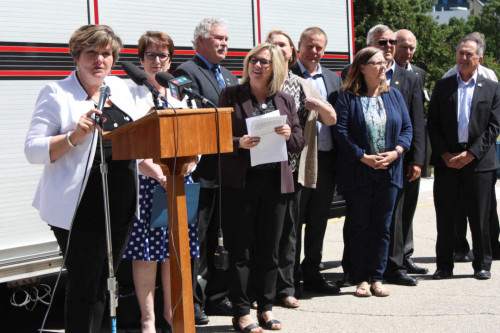 OPEN[AXIS] is a regional, shared data resource for decision makers to ensure the most up to date information is collected, managed and communicated for better decision making across the region. The reporting system – dubbed ‘FRS’(Fire Reporting System), was “developed with support from the Province of Manitoba, the City of Winnipeg and the surrounding municipalities, and is the first component of the shared OPEN[AXIS] platform,” said Colleen Sklar, Executive Director of the PMCR.

“The Province is proud to support the Partnership of the Manitoba Capital Region’s work to assist municipal officials and fire officials in communicating and keeping track of the emergency response services being provided by each municipality,” said the Honourable Eileen Clarke, Minister of Indigenous and Municipal Relations for the Province of Manitoba. “This exciting and forward-thinking service partnership will make it easier for municipalities to collaboratively address complex and costly emergency services operations,”

City of Winnipeg Mayor Brian Bowman supports Clarke’s notion on the importance of data collection, stating that “Gathering the most accurate regional information allows us to make better decisions towards maximizing taxpayer dollars while improving safety and services for all,” said Mayor Brian Bowman. “I’m pleased the City of Winnipeg is collaborating with our Capital Region partners on this innovative approach to reporting and purchasing which will lead to greater efficiencies and benefits for taxpayers in the region.”

Along with the FRS reporting system, the PMCR established a Purchasing Group for the tendering of common fire department equipment, which yielded a cost reduction of approx. 20%.

With the success of the initial equipment offerings, the PMCR will continue the Purchasing Group’s work, expanding the range of equipment tendered across other municipal departments.

The successful launch of FRS and the Purchasing Group is a point of pride for municipal members of the PMCR, as these are the first significant tangible results of their regional collaboration efforts.

John Lane, Chief of Winnipeg Fire Paramedic Service, agrees with the collaborative approach of the PMCR when it comes to the fire service – “Through cooperative collaboration among the emergency services of the Manitoba Capital Region, we can provide faster more comprehensive and safer services to our citizens, visitors, and business at significantly less cost than is possible individually,” said Chief John Lane.

The Partnership of the Manitoba Capital Region (PMCR) is a collaborative body, comprised of the City of Winnipeg and surrounding 17 municipalities. The PMCR unites decision-makers around a long-term vision built on the pillars of collaborative regional development, infrastructure investment, economic prosperity, and environmental stewardship.