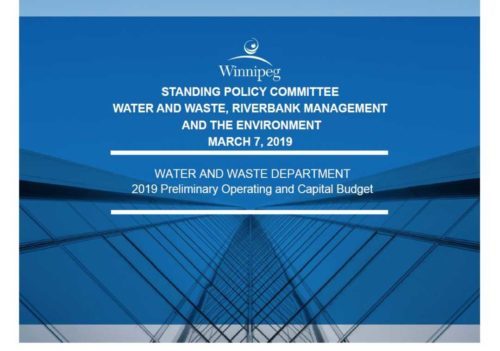 Statement to Standing Policy Committee Water and Waste, Riverbank Management and the Environment

Thank you Mme Chair, and Deputy Mayor for the time and effort you have invested into drafting the 2019 City of Winnipeg budget – I know it is a significant commitment of time and hard work.

By providing good information, analysis, and input, we can broaden the conversations this city has about its priorities; we can introduce new ideas that generate creativity, and to ultimately ensure a high quality of life for all. We are at the beginning of a new 4 year term – we have a very good mix of Councillors – we have new Councillors with fresh ideas, and Councillors with medium to long term experience.

This Council has diversity, we have gender representation, and we have people passionately committed to improving the quality of life for all Winnipeggers.

And we have the life and career experiences Councillors bring to the table. Every single Councillor brings unique value and perspectives forward.

Today we are here to move forward in passing the budget –

We don’t do a strategic planning process – which is a travesty – but instead – we allow the BUDGET PROCESS – to set the direction and priorities for the City.

But I believe this BUDGET PROCESS used to set the direction and priorities for the City is fundamentally flawed.  The process is over 20 years old and is in dire need of an overhaul.

The BUDGET PROCESS did not draw on the input of the 15 Councillors who were elected to represent their constituents – it was crafted by 8 Councillors and the Mayor.

Oh for sure the Mayor – when everyone was elected –  the Mayor held a ‘one on one’ meeting asking what the ward priorities were – and for sure the Chair of Finance held a meeting or two with the Councillors not on the budget working group – but those 2-3 hours of meetings with the Mayor and Finance Chair –  hardly compare to the countless hours, days and weeks you Mme Chair, Deputy Mayor invested, and the influence you had in the crafting of the budget.  I fundamentally believe it is wrong not to have ALL of Council participate in crafting the budget –

Citizens of Winnipeg elect 14 Councillors and a Mayor to represent them at City Hall and to ensure value for their tax dollars.  When we are ALL not at that table deciding or weighing in on how those tax dollars are invested – how can we be accountable to our citizens?

And now – we are here today – and in this 20 year old BUDGET PROCESS, what is an even greater travesty – is that the Councillors who were not on the working group are provide only 12 days to review the entire billion dollar budget –

The budget was tabled last Friday afternoon – some Councillors had a 7 hour committee meeting on Monday – allowing 2 business days to review the billion dollar budget – and then to come forward to the Standing Policy Committees with any recommendations.  And under this current governance model – it’s at the Standing Policy Committee meetings where – in theory – policy is to be debated and improved.

I’ve had 2 business days to review the Water and Waste budget – it’s virtually impossible to properly bring forward any form of policy recommendations and to scrutinize how our citizens tax dollars are being invested.

When you are part of the working group – you are rewarded – you’re rewarded with the ability to gain weeks of knowledge,  have influence over citizens tax dollars– and influence over where & how they are invested within the city.

In today’s day and age – citizens are demanding more and more openness and transparency from elected officials – its high time we change this BUDGET PROCESS so that all Councillors are part of crafting the budget on and are accountable for citizen’s tax dollars.

Every single Councillor brings value – this current BUDGET PROCESS does not allow our City to be the best we can be.  In 20 years – we’ve not had a governance review on how we do business and make decisions on behalf of taxpayers–

We are ALL here to make positive change –

I do believe we all recognize its time for a change – but it takes leadership to make change. I’m not sure where that leadership lays – hopefully in each of you.  I’m asking you to be a leader- push for that governance review to start – and lets bring not only our BUDGET PROCESS but all processes into the 21st century.

As for a detailed breakdown of the Water and Waste budget – it is not posted online and available to the public till the very second you reach that agenda item – how can anyone – citizen or Councillor look at the details and at that point – and formulate any kind of oversight of taxpayer dollars?