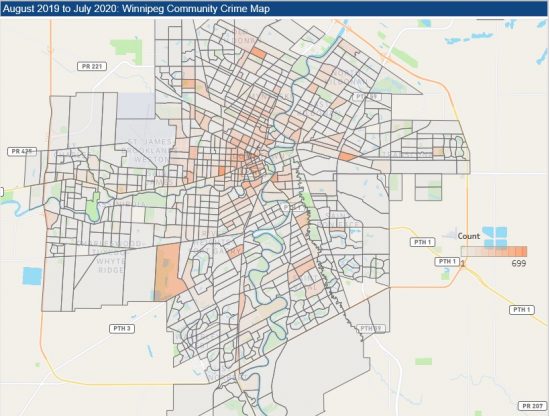 There is no way to sugar coat the crime situation in Winnipeg. This recent article posted below summarizes the huge challenge we are facing. As a City, we’ve never spent more money on policing in Winnipeg than we do now. Waverley West ward has one of the lowest crime rates in the entire City – but we still are seeing an increase in crime. Please learn how to:

I’m working with area residents to host a zoom forum on crime in November and will post details shortly.

OTTAWA — Manitoba has the dubious distinction of leading the country in a nationwide rise of shoplifting, fraud and car thefts in 2019 — a year when crime got more violent in Winnipeg.

The Statistics Canada analysis released Thursday could bolster calls to defund Winnipeg police, with crime continuing to rise in the community despite having the largest proportion of municipal funds among large cities.

The report found Winnipeg’s crime rate and severity are both rising faster than the national average, and closing a gap that previously had rural crime more severe outside the Perimeter Highway.

Shoplifting in Manitoba rose 48 per cent in 2019, compared with a year prior — the highest rate by far among the provinces. Winnipeg’s 54 per cent jump lags behind only Edmonton (57 per cent).

Manitoba recorded the nation’s biggest jump in police-reported fraud at 23 per cent, double the increase logged in Ontario and British Columbia.

Vehicle thefts were up 16 per cent in Manitoba, despite a 28 per cent decline nationally, including an eight per cent drop in Saskatchewan.

Meanwhile, Winnipeg logged a more intense increase in crime than the rest of the province in 2019, which seems to reverse a years-long trend of growing rural incidents.

“We’ve never spent more money on policing in Winnipeg than we do now, and we see crime rates going up really in the last three or four years,” said Kevin Walby, a criminology professor at the University of Winnipeg

Manitoba logged a 17 per cent jump in homicides last year, trailing Saskatchewan (21 per cent) and Alberta (19 per cent).

“The increases in Saskatchewan and Alberta were largely due to increases in (non-urban) areas, while the majority of the change in Manitoba was due to the Winnipeg (metropolitan area),” reads the report.

Winnipeg recorded a 10 per cent jump in its crime rate, which lumps together everything from homicide to bike thefts. But it had an identical 10-point rise in its Crime Severity Index, a metric based around the frequency and severity of crime.

That’s higher than the national seven per cent rise in the crime rate and five-point rise in CSI.

Warren Silver, who helped compile the analysis, noted Winnipeg’s record-breaking 44 homicides in 2019, and more assaults being classified as aggravated.

“Winnipeg having that many more homicides is a big driver,” said Silver, who trains police on reporting standardized data to StatsCan.

He said serious crimes can also increase the metric even when they’re rare. For example, extortion cases jumped to 29 from 24, while the cases of someone sharing intimate photos without consent went to 24 from 13.

“We’re not talking huge numbers in volume, but the severity of these types of violations,” Silver said.

Policing accounted for 27 per cent of Winnipeg’s city budget last year, the highest proportion of all major Canadian cities.

An Angus-Reid poll this summer found 36 per cent of Winnipeggers supporting cutting the police budget, the second-highest rate in Canada, which Walby only expects to grow in 2020.

“There may be more effective ways to address transgression, like putting money into addictions, mental health, housing and real, community and social development,” he said.

Winnipeg police have previously said a rise in methamphetamine use has made crime more violent in the city.