Rockin’ Around The Block Builds Community 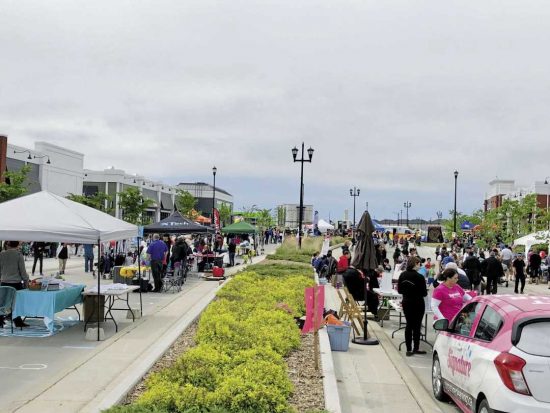 Many thanks to Bridgwater neighbourhod correspondent Debbie Ristimaki for her excellent reporting!

Rockin’ around the block builds community

Waverley West city councillor Janice Lukes, believes in the power of community and for that reason has made funding available to ward residents who want to hold block parties.

“I think it’s so important, in new communities or any community for that matter, for residents to get to know their neighbours, to support local businesses and to connect with each other,” Lukes said.

And it is happening.

Every second Friday in June, for the past five years, the residents of Erin Woods Street in Bridgwater Forest have gotten together to host a block party. They have tried a variety of approaches over the years, varying its theme — from potlucks to appies — and its location.

Naomi Shepherd, Ashley Tolton, and Lori Wilkins were the driving force behind this year’s party that saw their street blocked off to cars and given over to the children. Approximately 80 to 90 per cent of their neighbours partook in the festivities.

They see the block party as “a get-together with a purpose and people have come to expect it,” Lori said, adding that it brings neighbours together, creating a sense of togetherness and a sense of community.

I am not suggesting that a block party on its own will create a community but it is certainly an excellent way to start. It takes an effort and a desire to build what you want.

“Don’t be shy,” Naomi said. “Get outside and take the time to meet your neighbour.”

A word that popped up as we spoke about the experience was ‘family.’ Residents of Erin Woods Street have become extensions of each other’s families.

And yes, they took advantage of the financial support available through Lukes.

Meanwhile on Centre Street, the first Bridgwater Centre block party was held on Sat., June 15. Over 50 vendors participated, including those located in Bridgwater Centre, those run by Bridgwater residents, based elsewhere, and sponsors of the Neighbourhoods of Bridgwater Magazine.

According to Margaret Hemphill, publisher of the magazine and the event organizer, it was “a huge success.”

She is already looking forward to the second annual party.

Those interested in applying for financial support to hold a block party are asked to email jlukes@winnipeg.ca