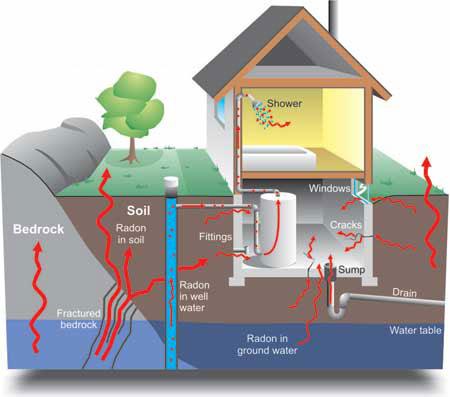 Radon is a radioactive gas found naturally in the environment. It is produced by the decay of uranium found in soil, rock or water. Radon is invisible, odourless and tasteless and emits ionizing radiation.

As a gas, radon can move freely through the soil enabling it to escape to the atmosphere or seep into buildings. If a building is built over bedrock or soil that contains uranium, radon gas can be released into the building through cracks in foundation walls and floors, or gaps around pipes and cables.

When radon is confined to enclosed or poorly ventilated spaces, it can accumulate to high levels. Radon levels are generally highest in basements and crawl spaces because these areas are nearest to the source and are usually poorly ventilated.

Fighting a ‘silent killer’ at home

Radon levels in Manitoba houses among highest in Canada

It’s been called “the silent killer,” and it can attack people in their homes.

“It” is radon, a radioactive gas produced by the breakdown of uranium found in soil, rocks and water. When it’s released into the atmosphere, it gets diluted and poses little risk to human health. But if it accumulates inside a home, over the long term it can pose a serious health risk.

So, as part of Realtor Week in Manitoba and National Radon Action Month in Canada, the Manitoba Real Estate Association (MREA) launched a campaign Monday to increase awareness of radon and to encourage Manitobans to test their homes for the gas.

Lorne Weiss, chairman of the MREA’s Political Action Committee, told reporters at a morning news conference it’s estimated about 14 per cent of Manitoba homes have unacceptably high levels of radon, which is one of the highest rates in the country. In fact, radon gas is the second leading cause of lung cancer in the province.

‘(Testing your home) is so easy to do and it’s so cost-friendly, so if you and your family are living there, why wouldn’t you do it?’ — Lorne Weiss

Weiss said winter is a good time to check for radon gas because the air conditioning isn’t on and homeowners aren’t opening doors and windows as often, so more accurate readings can be obtained.

He said most homeowners who get their homes tested will likely find there isn’t a problem. That was the case with his home when he tested it last winter. But radon levels also could be unacceptably high, he added, so why take a chance, he added.

That’s also the advice of Dr. Lisa Richards, medical officer for the Winnipeg Regional Health Authority. She and her husband are taking steps after discovering four times the safe level of radon in the basement of their home and slightly elevated levels on the main floor.

“We know that radon gas is the second leading cause of lung cancer in Manitoba,” Richards said. “So we are encouraging everyone to test their homes and take measures to remediate if necessary.”

Weiss said most hardware stores sell radon test kits for about $50. The kits include a small, puck-shaped tester with test strips, as well as instructions on where to send the test strips for analysis.

It’s recommended the tester be placed somewhere that isn’t close to a door or window, and that it be left there for about three months. The homeowners should get a report back in a few weeks stating what the level of radon gas is in their home. It will also recommend what, if any, remedial action should be taken, and how soon it should be taken.

Monday’s news conference was held in the home of Winnipeg real estate agent Trudy Turner, who tested her 1980’s-era bungalow last winter and found radon levels in the basement were above the acceptable guideline, at 488 Bq/m3.

She and her husband are having a heat recovery ventilator (HRV) unit installed in the basement this fall. The unit regularly replaces inside air with fresh outside air to reduce radon levels to an acceptable level. It’s costing them about $2,500, and Manitoba Hydro offers lower-cost loans to cover the cost. The monthly payments are added on to the homeowner’s hydro bill.

“For most families, it should be financially obtainable using Manitoba Hydro’s financing option,” Weiss said. “It (testing your home) is so easy to do and it’s so cost-friendly, so if you and your family are living there, why wouldn’t you do it?”

While it’s not a requirement at the moment, he and Turner believe it’s also a matter of time before one of the standard questions on a homeseller’s disclosure form will be whether the home has been tested for radon gas, what the results were, and what, if any, remedial action was taken.

“If you have a home that had high radon levels and it has been remediated, it doesn’t stigmatize the home at all,” Weiss said.

Turner said she and her husband didn’t think twice about having an HRV unit installed in their home.

“It’s a safety issue. You know what you should do and you just need to do it.”

Weiss said installing an HRV system is one of several possible remedial solutions. So it’s worthwhile to consult with a radon mitigation professional who has been certified by the Canadian National Radon Proficiency Program (C-NRPP) to learn which solution is best for your situation.

What you can do

HERE are some of the options for remediating a home with radon gas. Cost can vary depending on the level of radon and the remedy that’s chosen: