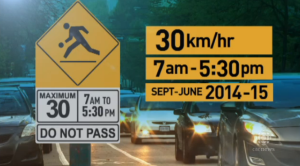 CAA Manitoba is calling for better visibility in school zones so drivers are more aware of the rules and regulations.  ​Legislation regulating speed limits in school zones changed in 2014—which means municipalities are able to create them on their own terms.  That means speed limits vary and CAA says this discrepancy can be confusing for drivers.

“We want to make it fairer for motorists,” says Mike Mager, president and CEO at CAA. “Even adding flashing amber lights to the signs could make them more prominent, meaning more people slowing down and in turn, ensuring the safety of our kids.”

Mager said the city has seen a $14-million windfall in ticket revenue this year, thanks in part to tickets handed out in school zones.  He would like to see revenue from speeders in school zones contribute to road safety improvement around schools, like additional lights. However, he said when he misses a sign his biggest concern isn’t a ticket.  “My bigger care is that I’m speeding in a school zone and I might hurt somebody,” he said.

Stu Reid likes the idea of flashing lights in school zones. He says it would help make speed changes more noticeable.  “Me and my wife are driving around a lot and most of the time we have no idea what the speed limit is—if something isn’t jumping out at you,” he said.

Christy Hemmerling’s children go to Grosvenor School in Crescentwood, and she likes the idea of lowering residential speed limits.  “Motorists go quickly on my street, which is a residential street, and I have lots of kids, so to see the speed limit dropped, I would welcome that,” she said.

Janice Lukes, head of Winnipeg’s Infrastructure and Public Works Committee, said the city needs to study different methods before it can change anything.  Lukes doesn’t think flashing lights are the solution because there are already too many lights and other distractions for drivers. She said speed bumps could be the answer because drivers are forced to slow down.

In Ontario and Quebec, flashing lights in many municipalities are added just before the start of a school zone to alert drivers that there is a reduced speed zone ahead.