The Toll on Our Roads 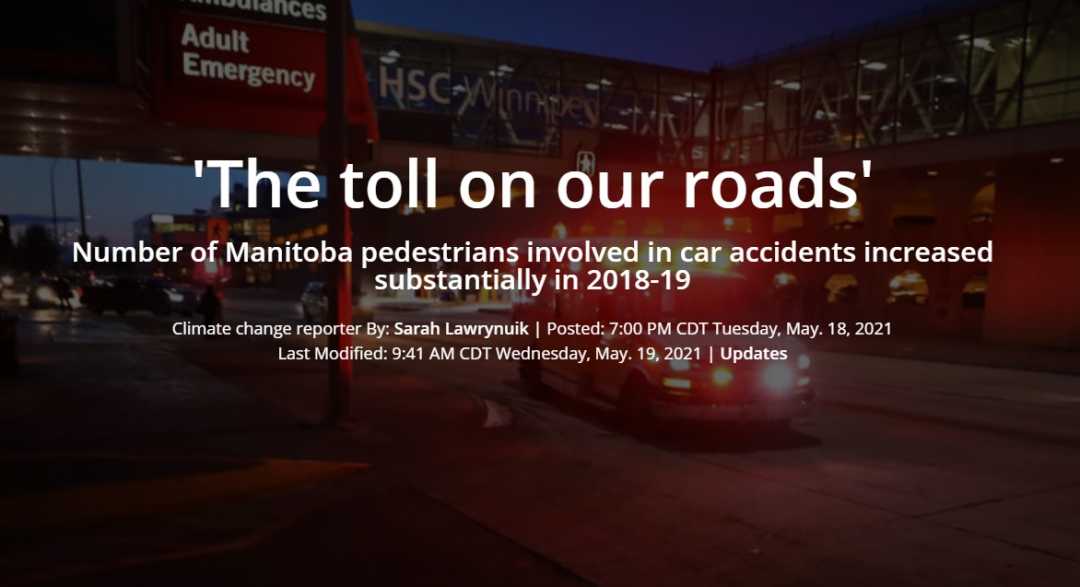 Thank you to the Free Press for sharing this important information about the safety of the vulnerable road users (cyclists and pedestrians). Manitoba Public Insurance uses the term ‘vulnerable road user’ to describe pedestrians and cyclists which is very fitting. The Waverley West ward has the best network of sidewalks and pathways in the City of Winnipeg – upwards of 120 km of sidewalks and pathways! This is fantastic as it allows pedestrians and cyclists facilities that are separated from vehicles.  BUT – this is only in the Waverley West ward – and its important to note that most death and injuries occur at intersections – where vehicles and the vulnerable road users converge.

Some residents may feel I go overboard with my concerns and actions about racing vehicles and the safety of pedestrians and cyclists. I do receive emails to this nature.

Maybe I do. I’ve had the opportunity to travel to many countries in the world, where the rules of the road are nowhere near as regulated as they are in Winnipeg – countries where the speeds and power of vehicles are nowhere near what they are here, and where pedestrians, cyclists, scooters and tuk tuks intermingle with an amazing ease and level of safety. This is not the environment in Winnipeg.

In this role, I feel it is my responsibility to share important information about safety, to try pilots, to and apply different types of infrastructure to improve the safety of our roads. For sure there are other Councillors who may not be as aggressive in their approach to road safety, but your Waverley West Councillor is and I apologize if you find my focus on road safety to be too intense at times.

‘The toll on our roads’

The flash of the fire truck’s lights ahead signalled for a slowdown while cruising St. Mary’s Road with the windows down.

It was late March, but an unseasonably warm afternoon. School had just let out. Teens and pre-teens from four nearby schools flooded the area sidewalks.

Drivers rubbernecked as they passed the accident, only to catch a glimpse of a blonde boy, probably no older than 13 or 14, lying on the pavement, next to his bicycle, in a marked crosswalk near the median.

The Winnipeg Fire Paramedic Service later reported the adolescent cyclist didn’t sustain any major injuries but was taken to hospital as a precaution.

The boy is one of hundreds of Manitoba cyclists and pedestrians that will be injured or killed by drivers over the course of the year. Most such incidents won’t make it into the news cycle. 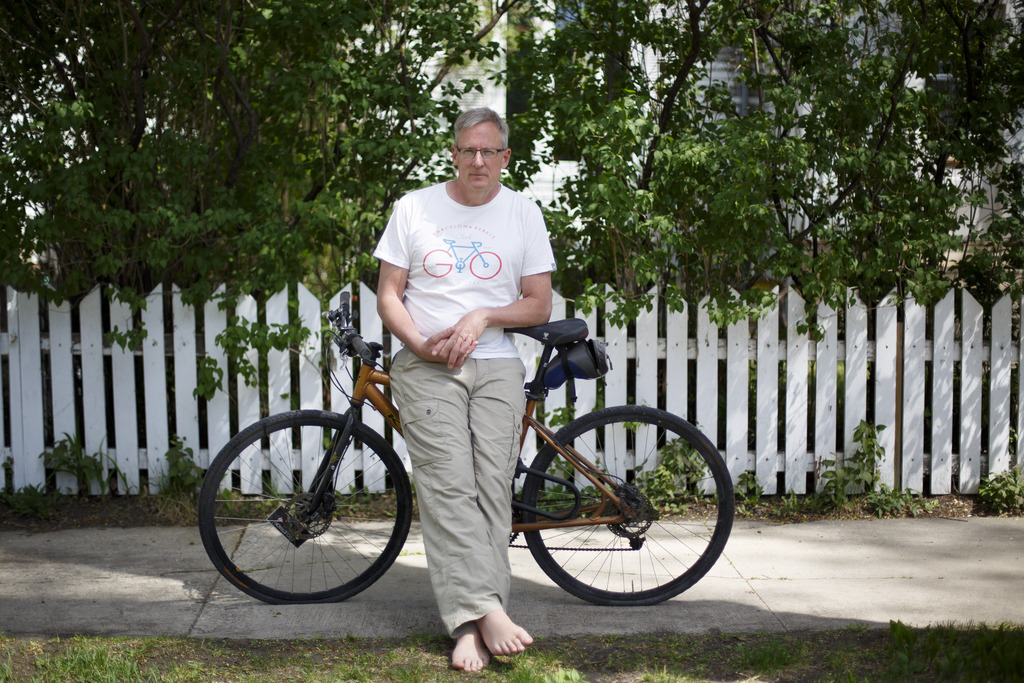 The approach to ground transportation has been to make it as safe as possible for cars with everyone else a secondary consideration, says Brian Pincott, executive director of Vélo Canada Bikes.(Mike Deal / Winnipeg Free Press)

On average, between 2012 and 2019, 260 pedestrians and cyclists were injured or killed annually in vehicle accidents in Manitoba. The average number of deaths in that time period is 15 per year.

While exact data for Winnipeg is difficult to distil from the statistics provided by Manitoba Public Insurance, most of those accidents occurred in urban settings. Winnipeg is Manitoba’s biggest urban centre.

One hundred and twenty Manitobans died while walking or cycling between 2012 and 2019.

“Our approach to ground transportation has been to make it as safe as possible for cars and for drivers, and everybody else is a secondary consideration,” said Brian Pincott, executive director of Vélo Canada Bikes.

“And we are seeing the toll on our roads, and our streets, and our neighbourhoods that that approach is bringing us — particularly as more and more people are now looking to use other means than just driving everywhere.”

In 2019, MPI data show walking as the second-leading activity for a vehicle-involved fatality (23 per cent). Head-on collisions between two vehicles was No. 1.

The problem may be getting worse. 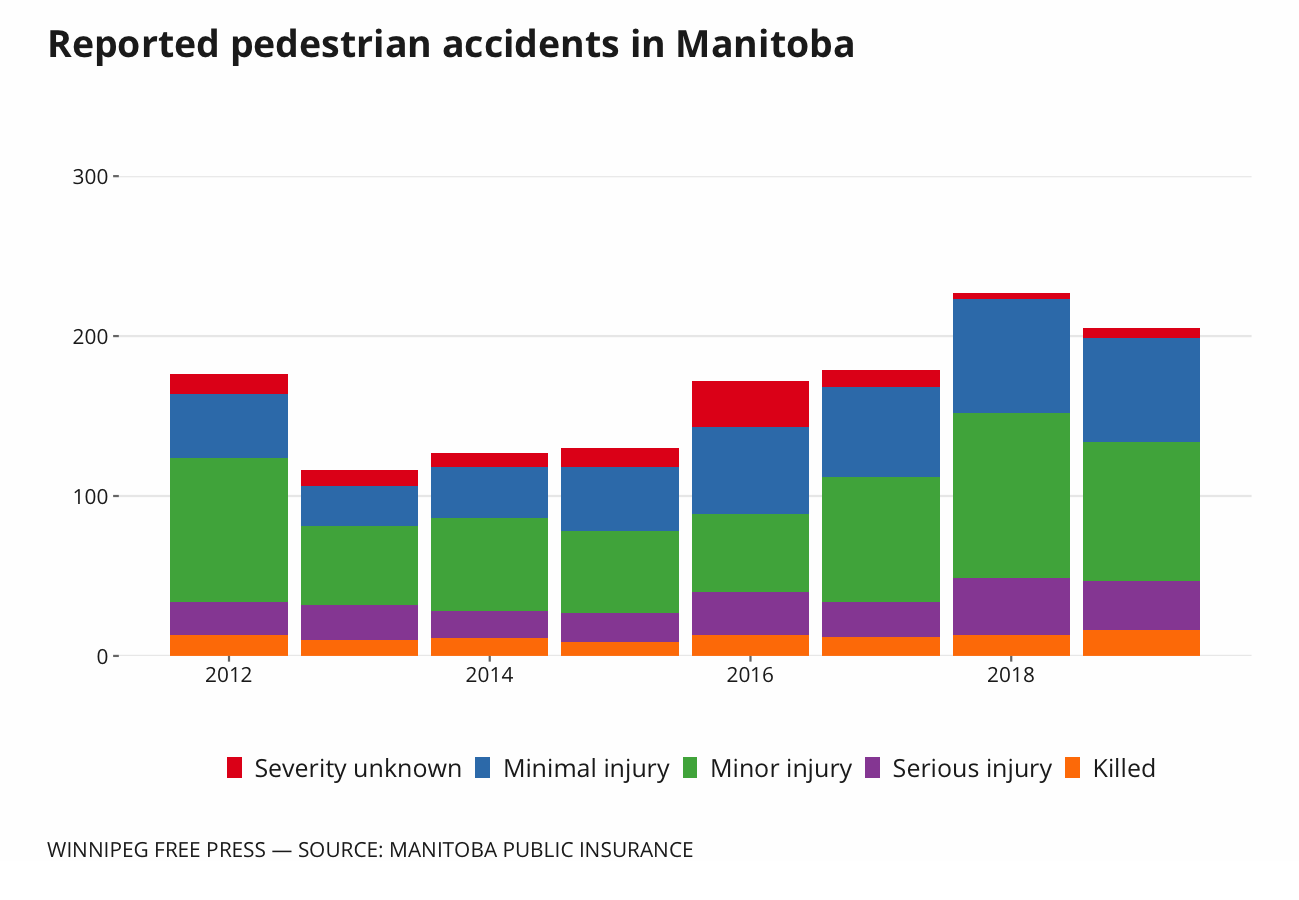 The 2019 statistics show a pedestrian was most likely to be involved in an accident when walking in a marked crosswalk at an intersection, where they have the right of way.

In other words, when they followed the rules of the road.

Meantime, convincing Winnipeggers to leave their cars at home and walk and cycle is a critical part of the city’s climate plan to reduce emissions.

“I think it speaks to the need to build more protected infrastructure to meet our climate goals,” said Coun. Matt Allard (St. Boniface).

“We’ve gone a long way from where things used to be, but we need to prioritize active transportation more than we currently do in order to get to those goals and to reduce injuries to our cyclists and pedestrians.” 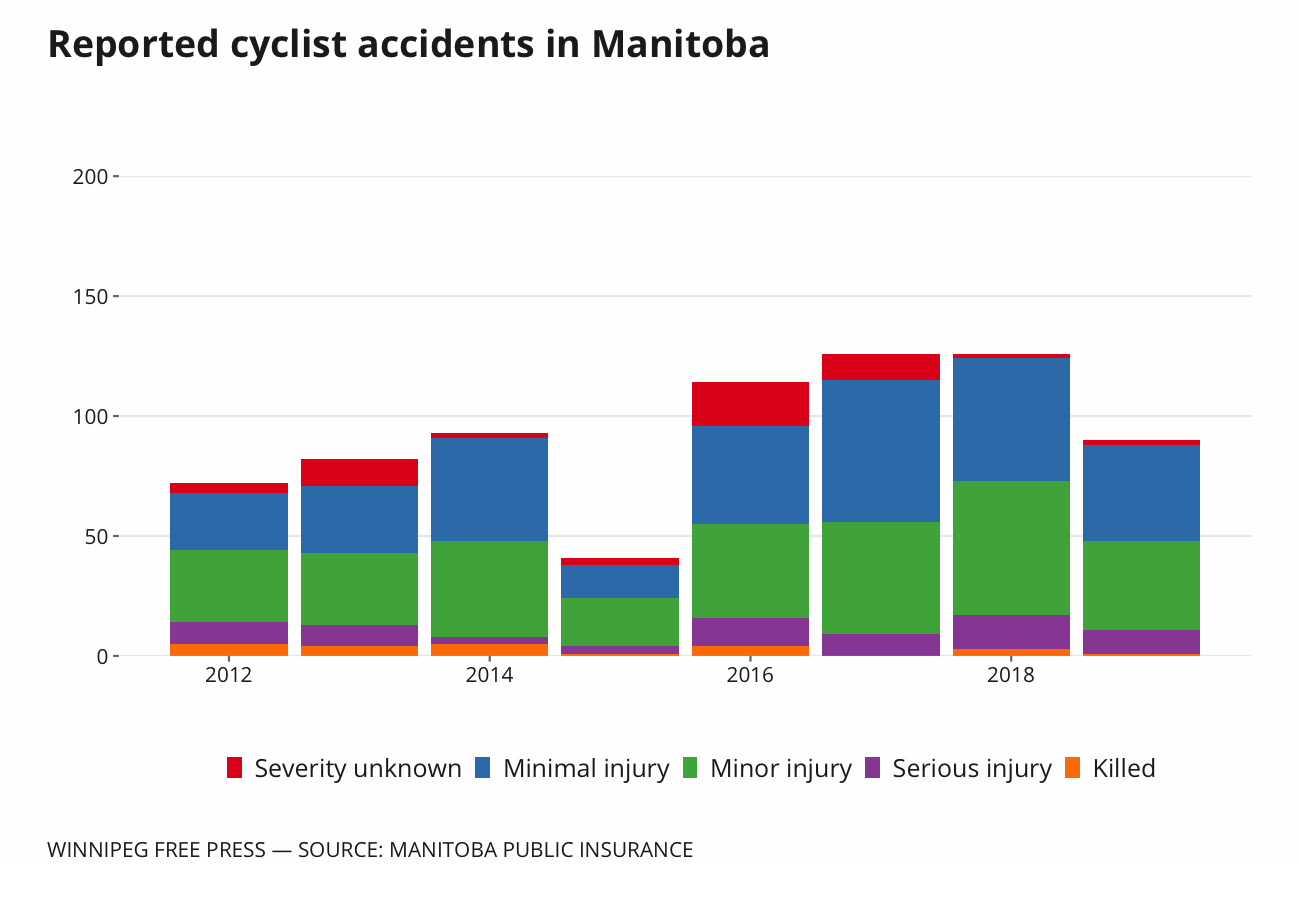 Winnipeg currently has the fewest kilometres of bike trails of any large Canadian city (307 km) — compared with 557 km in Toronto, 800 km in Ottawa, and 1,290 km in Calgary.

However, Coun. Jeff Browaty (North Kildonan) says he’d like to see more focus on the separation of cars from cyclists and pedestrians, with the prioritization of car-only infrastructure. For example: how construction of Chief Peguis Trail cleared a great deal of car traffic off residential roads.

“Compared to other cities, a lot more of our traffic goes down arterials that are shared, which aren’t as well-split as you’d find in some cities,” Browaty said.

He also advocated for better enforcement and public campaigns to address the dangers of distracted driving and distracted walking, too.

Both Pincott and Allard disputed Browaty’s approach of continued investment in car infrastructure.

“We’ve been focusing almost exclusively on car infrastructure for the last 100 years. I would say the definition of insanity is doing the same thing over and over again expecting a different result,” Pincott offered.