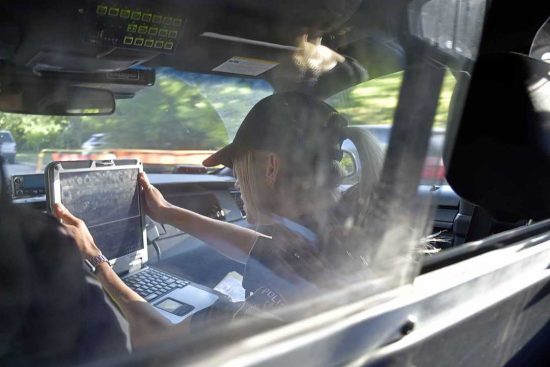 There have been consistent crime levels for the past few weeks in the Waverley West ward pertaining to break & entry, thefts from motor vehicles and mischief. Nicer weather often results in more criminal activities, and combined with the meth crisis, even more of these types of crimes are occurring. I am in regular conversations with our District Inspector – who ensures BOTH marked and unmarked Winnipeg Police Service vehicles are patrolling the area.  Please read these key points and learn what YOU can do in becoming PRO-ACTIVE in preventing crime.

With much thanks to the Winnipeg Free Press for excellent reporting

River Heights is getting lit up in an effort to stop membership in the Smashed Windows Club from growing.

Resident Marli Sakiyama spent Tuesday evening driving through the neighbourhood in the back of a police cruiser car, encouraging people to take a free solar light — a $90 value, with installation included — to brighten up back lanes, hopefully deterring thieves and vandals from cutting through yards.

After getting the bright idea, she called city councillor John Orlikow, who provided a grant from his ward funds. Last year, she distributed 50 lights. She has a $3,000 grant this year and hopes to raise even more.

West District police identified homes where multiple property crimes and car break-ins have occurred and went back at night to see which houses could benefit from more lighting. The Brighten Up program is reaching out to residents in those houses first.

“This is proactive,” said Wildeman. “You actually get to stop stuff before it happens.”

“All summer we’re going to be patrolling the heck out of this neighbourhood,” Laurel said.

“The crime spikes in the city, the frustrating part for victims is, they make a report, they don’t necessarily see the results,” said Herman. By getting involved in programs like this, police hope to engage the community about what they can do to prevent crime.

The solar-powered lights don’t need wiring so they’re easy to install high up on garages where they’re more difficult to vandalize; Sakiyama said one installed last year was smashed.

And while property crimes aren’t the end of the world, they’re an all-too-frequent source of frustration, light recipients said.

“It’s just so annoying,” said Cathy Purchase, who has had two snowblowers and her son’s bike stolen from her garage.

The lights are certainly a step in the right direction, she said.

“The light in the back lane is super-helpful,” Wildeman said. We can’t drive down every back lane, but when we’re driving down Corydon we can look down a back lane — and if I see someone walking down a back lane at one in the morning, I’m going to go talk to them.”

Sakiyama has begun the process of incorporating the non-profit River Heights/Crescentwood Safety Association and hopes others in the neighbourhood will get involved.

“One of the things I’ve been focusing on is, instead of complaining, coming together,” she said.

“We’re working together, we’re all looking out for each other… I love it when people are thinking like that.”

NOT A NEW PROBLEM

River Heights residents who got a visit from Brighten Up Tuesday collectively said property crime is a fact of life in their neighbourhood. Here’s how they’re dealing with it:

• Graeme McMillan estimated he’s been the victim of a half-dozen property crimes in 18 months. On one occasion, his truck was ransacked when he inadvertently left it unlocked, but his tools were left untouched. On another, heavy buried electrical cables were stolen in the middle of the night while his garage was under construction. He now has lights, cameras and an alarm system. “As many deterrents as possible,” he said.

• “It’s mostly the cars,” said Andrea Kavanagh. “I’ve had this vehicle for a year and I’ve had the windows broken twice and my other vehicle was three times. And (her husband’s vehicle) twice.”

“This year is definitely more frequent,” she said. “Most of the time I feel like we’re quite safe… but it is annoying to drive around with Saran Wrap (covering the window openings).”

• Glen Cappello said he hasn’t been the victim of any vandalism so far this year, but one day last year six cars were damaged on his block — including his brand-new truck. “I don’t leave anything in my vehicle anymore,” he said. “Sometimes it’s better just to leave it open, if there’s nothing in it.”

• Three weeks ago, someone rifled through Lissa Ranta’s car. “It’s kind of ridiculous, honestly,” she said, adding it’s a safe neighbourhood despite the number of break-ins.

• “People say the police aren’t doing enough, but I know that there’s only so many resources that can go to it,” said Ezra Ginsburg. “It’s frustrating, but I know there’s not a lot that can be done about it.”

• Tim Swynar said he moved to the neighbourhood four months ago but has installed, “lots of lights, motion sensors, anything to make people keep on walking. And that’s kept us in a pretty good place,” he said. “Keep the place lit up… keep it lit.”

• 116 property crimes in area bounded by Academy Road and Grosvenor Avenue and Campbell and Renfrew streets.

• 110 property crimes in area bounded by Academy Road and Kingsway and Cambridge and Ash streets.

• 93 property crimes in area bounded by Grant Avenue and the tracks south of Taylor Avenue between Campbell and Ash streets.