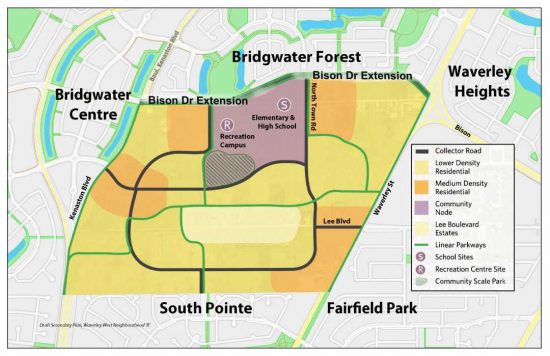 A brief update on the South Winnipeg Recreational Campus. Since 2014, I’ve posted updates on my website regarding the long and complicated process – from lifting a clause prohibiting development, to acquiring City land (19 acres), to partnering with the Province on the joint construction of the schools and recreation campus (25 acre site), through a neighbourhood planning process, changing site locations of the schools, to a public hearing, to refining development cost sharing agreements. Taking an open prairie field and moving it through the many development processes to the point of installation of pipes and roads is no easy short term process.
Before a shovel was even put in the ground for the first home in Waverley West, the City had identified a recreation shortage.The process to develop a recreation campus started prior to 2008 – and now we are closer now than ever to opening the land for construction of the recreation campus and elementary and high school sites.

In June 2019, Council unanimously approved the Waverley West B Secondary Plan, laying out where roads, and development types/zoning  would occur. This was a 1.5 year planning process that had to occur before a road or drainage pipe went in the ground. This process formed the ‘bones’ of the new development.

To date, the City has set aside approximately $30M to invest in the recreation campus. The estimated cost is $100+M.

Provincial funding is being allocated for the elementary, high school and day care. For details on projected opening dates of schools, please contact the Ward 3 Trustees of the PTSD

The City is working with the Federal and Provincial governments to secure funding for the $100+M for the recreation campus.

September 2019: City Council will be prioritizing City projects to submit for Federal and Provincial funding.

October 2019: City will submit a request/application to the Province with Council approved priorities to be funded by the Federal ICIP funding program. The Province will review, and most likely add some Provincial priorities to the application and determine their funding allocation. The Federal ICIP program funds approximately 40% of a project cost.

So in summary, a lot going on right now. All levels of government recognize the pressure to move forward with the construction of an elementary and high school. The City is under extreme pressure to provide recreational services to 40,000+ residents. Nothing can start till the roads and sewer pipes go in – and these details are under discussion. Exciting times!

When Federal and Provincial candidates come to the door asking for your vote, tell them you need their support in funding the South Winnipeg Regional Recreation Campus. SEE ELECTION 2019