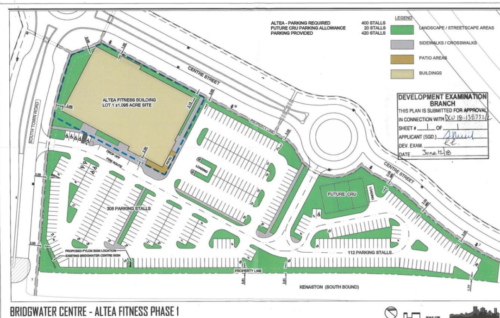 I’m very excited about the new 70,000 sq ft recreation center that is being planned for construction in Waverley West. This recreation centre is a privately owned facility, and is anticipated to open Fall 2019. I’ve been working with the owners and planners and expect all details will become public on the City’s website on September 5th, and the owners will be presenting the plans to the Riel Community Committee on  September 12th.  This is an incredibly exciting and much  needed project. Watch my website for details.

Thank you to the Sou’Wester for this coverage

On July 16, the Riel community committee approved the site plan and layout for a massive recreation centre — billed as having a “variety of modern fitness amenities” in a city administrative report — at South Town Road and Centre Street and a 420-stall parking area.

About 1,000 metres east of the proposed fitness centre, the City of Winnipeg along with the Pembina Trails School Division, South Winnipeg Community Centre and other community stakeholders are also planning to build a recreation campus in conjunction with two new schools, recently announced by the province.

“This is not at all any form of replacement for what we’re building at the recreation site by the schools,” Lukes (South Winnipeg-St. Norbert) said. “We absolutely are in the planning stages with the province of Manitoba, the Pembina Trails School Division, and the developer because we’re moving forward with this.”

The Waverley West recreation campus would include a fitness facility (the City has a tentative agreement with the YM-YWCA to build several facilities in the city), parks and athletic fields, and a library on expropriated land at 262 Cadboro Rd.

Lukes said the City has set aside money for the public facility and the entrance of a private business offering comparable services doesn’t negate the City’s responsibility.

“The City has a massive obligation to develop a regional recreational facility in the southwest quadrant of Winnipeg,” she said. “The City is committed 100 per cent to doing just that.”

While recent reports suggest the Waverley West recreation campus may open its doors to the public within three and six years, Lukes said developers of the new fitness facility on Centre Street hope to be open by fall 2019.

Lukes said she can’t divulge the details of the development before a plan approval comes to Riel community committee in September, but insists the amenities in the proposed fitness centre will “blow people’s minds.”

“Because it’s private, it will be built very quickly, versus a public facility,” Lukes said. “They’ve told me that it’s similar to a YM- YWCA in the sense that the prices will be Y-ish.

“They did say on the public record that they will have a type of child care for parents who want to come and use the facility… so that’s exciting,” she continued.

“This is a phenomenal project for south Winnipeg the timing couldn’t be better.”

Ray Wan, of Raymond S.C. Wan Architects Inc., has been working with the developers and appeared as a delegate for the project at the Riel community committee meeting.

Wan said the community will have to wait a bit longer to learn who their new neighbours will be and just what their plans are for the site, as the developers aren’t prepared to speak about the project until everything is approved by the City.