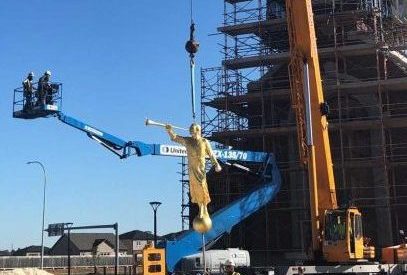 This absolutely stunning temple is rising up in Bridgwater Centre! We are all so happy for the Church of Jesus Christ of Latter-day Saints community! Not only is the architecture of the two buildings very unique-the landscaping of the site will transform the entry to our community! Very honoured to have been invited to the rising And installation of the Angel Moroni! Can’t wait for the official public opening to have a peek inside!

Thank you to the Winnipeg Free Press for covering this important community event.

For Winnipegger Allan Robison, the raising of a statue of the angel Moroni on the top of the new temple of the Church of Jesus Christ of Latter-day Saints was “a significant event, the crowning glory.”

Robison, a former president of the church in Manitoba, was among about 30 people gathered Tuesday morning at the site of the temple in the Bridgwater neighbourhood in the south part of the city to watch the statue lifted to the top of the steeple.

“I’m happy to be part of it,” he said, adding “I’ve never been at the raising of the statue of Moroni before.”

The raising of the gold leaf-covered statue, which stands 2.4 metres tall and weighs 136 kilograms, represents “that we’re almost the last stage of construction,” Robison said. “It shows we’re getting close to opening.”

The statue was made in Salt Lake City, headquarters of the church, and transported to Winnipeg. It depicts Moroni, an ancient prophet in the Book of Mormon, who the faithful believe appeared to church founder Joseph Smith.

Moroni is seen on top of the temple blowing a trumpet and standing atop a globe, symbolizing the spreading of the gospel of Jesus Christ. Identical statues are found on almost all of the church’s 168 temples worldwide.

Traditionally, the statue has been placed on temples facing east. More recently church officials have authorized placing it more in line with the front of temples for esthetic reasons. The statue in Winnipeg faces southeast.

Among the group watching the statue go up was Kim Sanchezaldana and his wife and children.

“I am very excited to see this,” he said. “It’s a symbol of how we can soon be closer to God in the temple.”

For Sanchezaldana and the 4,500 other members of the church in Manitoba, the building of the temple also means no more seven-hour drives to the nearest temple in Regina for sacred ordinances such as marriages and baptisms.

“It will be a much shorter drive now,” he said, noting he just lives five minutes away.

Jim Kroeker of Cardston, Alta., is the site project manager and a member of the Church of Jesus Christ of Latter-day Saints. Born and raised in Manitoba, the University of Manitoba graduate has supervised temple constructions in the U.S. and Canada on behalf of the church.

The Winnipeg temple is one of only two in the world built of a stone and brick combination, he said, in keeping with the style of similar buildings in the province.

A unique Manitoba touch are prairie crocuses on the exterior medallions. “It gives it a Manitoba flavour,” he said.

He noted temples are not used for Sunday services; there is no one big meeting room inside the building. Rather, it is made up of a number of smaller rooms where members can be baptized, solemnize marriages and receive religious instruction.

For members of the church, “the temple is an embassy to the eternal world,” he said, a “link between heaven and earth.”

Because the site is also considered sacred by the church, construction workers pledged not to spit, smoke or swear while working on the temple or its grounds.

“It’s an honour system,” said Kroeker. “I never had to call anyone out. They’ve all been very respectful.”

In addition to the temple, the site contains a chapel that can seat 300 people. It will be used as a meeting place for a local congregation of the church.

The cost of the temple is completely covered by the church out of its international headquarters. “It will be totally paid when done,” said Robison, noting Winnipeg is the last major city in Canada to get a temple.

Sod turning for the temple took place in December 2016 and construction started in 2018. It will be formally dedicated in November.