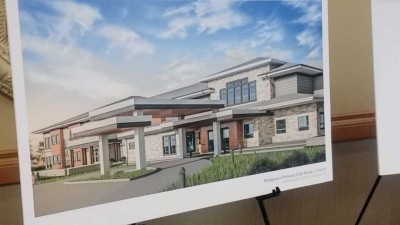 There’s lots happening in the Neighbourhoods of Bridgwater!  On the horizon is a new personal care home, to be constructed at Bridge Lake Drive and South Town Road.

For more information regarding this initiative, contact your elected MLA or the Province of Manitoba.

My thanks to The Sou’wester for reporting on this story.

A proposed 120-bed personal care home in Bridgwater is going ahead as planned despite a provincial cap on capital spending, the executive director of Winnipeg Mennonite Seniors Care said.

John Thiessen said the project, which was publicly announced in December 2015 but had been in the works for many years, is moving forward with the same initial footprint and operational model.

“We have heard nothing to indicate that we’re cancelled,” Thiessen said. “As far as we know we’re proceeding and I think the reality is that we’ll have to be somewhat creative in how the financing comes together for that.”

On Feb. 8, the provincial government announced it would be cancelling a number of projects that did not fit within Manitoba Health’s spending limit for capital projects.

Health minister Kelvin Goertzen said Manitoba Health will exceed its capital cap in 2017 and 2018, making it necessary for several projects (including a personal care home in Lac du Bonnet, a consultation clinic in Thompson, a St. Vital primary care access clinic, The Pas primary care clinic, and a $300-million CancerCare Manitoba facility) to be removed from the capital program.

“The previous administration committed to many projects in late 2015 and early 2016 despite knowing the government’s limited ability to pay for either their construction or the operating budgets required to provide services at these new sites,” Goertzen said.

A spokeswoman for Goertzen said the Bridgwater Personal Care Home, and another facility in Transcona called Park Manor, are not formally cancelled though the department is working with the developer to “change the scope.” She also noted that the government campaigned on a promise to build 1,200 personal care home beds in eight years at a cost of $160 million ($133,000 per bed).

In 2015, the Bridgwater home was billed as an innovative approach to seniors care, incorporating design standards that would make the home both a therapeutic environment and cognitive tool for residents. It was also said to be the first home of its kind in Manitoba to be registered with the Centre of Health Design. At the time, the facility was scheduled to be open in 2018.

Final drawings for the home, which is to be constructed at Bridge Lake Drive and South Town Road, were completed the first week of February and the next step is for the  project to go through budget and tendering processes, Thiessen said.

“It’s been our vision to do something that’s innovative and creative in the seniors care,” he said.
“It’s substantially exactly the same as it was and the concept is the same. I haven’t heard anything from the WRHA or Manitoba Health that they want to move away from that model, so we’re planning to proceed using the household model of seniors care.”

Thiessen also said the new funding numbers haven’t been given to him directly from the province, and he hasn’t been in contact with Manitoba Health about reining in capital spending.

“The current government is wanting to be responsible with funding, and yes it is frustrating that we’re looking at a dollar figure that’s lower than we feel we can build this project for, but it is a reality of a province that’s a billion dollars in deficit,” he said.

“We consider the government our partners and together we’re working on developing a funding method to make it work.”