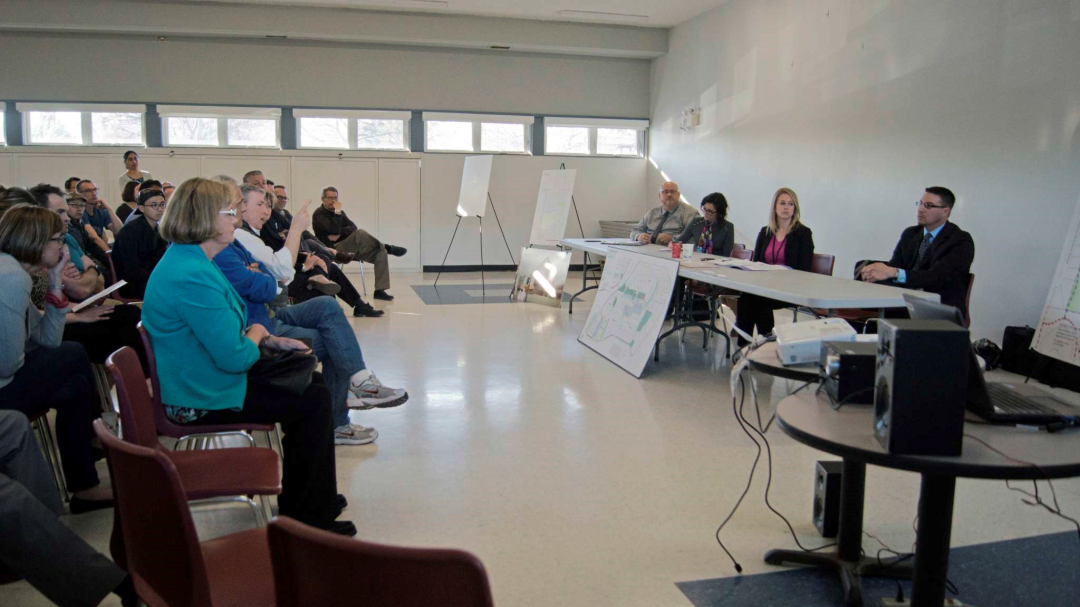 To keep residents informed on Manitoba Housing’s plans for this 6.9 acre parcel of land, I’ll be continuing to provide updates on my website.

To learn more about the Bridgwater Forest Neighbourhood Association, you can contact them at: Facebook Page and E-Mail Bridgwaterforest@hotmail.com

Calls to maintain a former school site as a public amenity in Bridgwater Forest were quieted by Manitoba Housing at an open house on May 3.

The Crown corporation and developer of the Bridgwater neighbourhoods hosted area residents at the South Winnipeg Community Centre – Richmond Kings site to receive feedback from the community on its proposal to build 21 lots on a 6.9 acre property at Prominence Point and Bridgeland Drive North.

The site was set aside for a school in 2007 and was zoned R1 single family residential, if a school was not constructed. The Pembina Trails School Division informed Manitoba Housing in 2011 that it wouldn’t be building a school on the property.

“Manitoba Housing has always maintained that if the site was not developed for a school then the land would be developed with single family residential,” Dwayne Rewniak, executive director for housing delivery and land development with Manitoba Housing, told the more than 40 people assembled.

Rewniak called the construction of single family homes on the site — which currently has about three acres of forest and three acres of greenspace — a “done deal.”

“The land use is not at question — what is at question is the subdivision plan,” he said.

According to Rewniak, under the current zoning the site could be developed to include 31 lots but following discussions with the Bridgwater Forest Neighbourhood Association which advocated for the protection of existing trees, Manitoba Housing proposed a smaller development plan. Manitoba Housing has already paid about $500,000 to service the property, Rewniak noted.

“We’re committed to preserving the majority of the existing forest with this plan that we’re putting forward,” he said.

Residents at the forum aired their grievances with the proposal, raising concerns about premiums paid to builders for a lot that bordered a “forest,” a lack of usable green space, traffic, the gradual loss of trees throughout the community, and the initial sales pitch to home buyers that led them to believe the space would be a public amenity.

A petition is circulating online with over 200 signatures calling for residential development on the property to be halted.

Mike Shawn, a board member of the Bridgwater Forest Neighbourhood Association, acknowledged that residential development is likely occur on the site, despite neighbour’s concerns.

“Residents have a right to be upset,” Shawn said. “It’s nothing different than we’ve already heard from Manitoba Housing. They will build houses.”

The association is advocating for Manitoba Housing to take a second look at what the development could involve and possibly include a soccer pitch or baseball diamond.

“It should include public usable greenspace. That’s one thing we believe strongly as an association,” Shawn said. “The only leverage that the association has is residents making their voice heard.”

Ruth Ola, an area resident, told Manitoba Housing she feels as if the decision has already been made and the corporation is imposing its plan on the community.

“We want a place where families can have fun,” she said, suggesting fewer homes be built on the property. “Bringing more houses creates more traffic in the morning when you are going to work, building more houses will create temptation to park on the road and on Bridgeland Drive North there will be traffic.”

Other residents also expressed feeling neglected by the province, noting that no one was there to advocate on their behalf. The MLA for the area is Premier Brian Pallister. Requests for comment from Pallister’s office have not been returned.

“We would definitely appreciate some feedback from Brian Pallister, our premier and MLA,” Shawn said, noting the resident’s association has yet to hear from the MLA’s office.

Rewniak said any profit from the sale of the lots on the former school site will be directed to the agency’s Housing Development and Rehabilitation Fund. Feedback from residents at the meeting will be taken under consideration though it’s “hard to say” how much more compromise can be made, Rewniak added.

“We’re already down to 21 (lots), while we want to try to be flexible here, we’re really going to have to look at the numbers to see what kind of configuration can work best with respect to the comments we received tonight,” he said.

“People are wanting another opportunity to see what we come up and I think we certainly committed tonight to continuing our ongoing discussions with the Bridgwater Forest Neighbourhood Association,” he said.