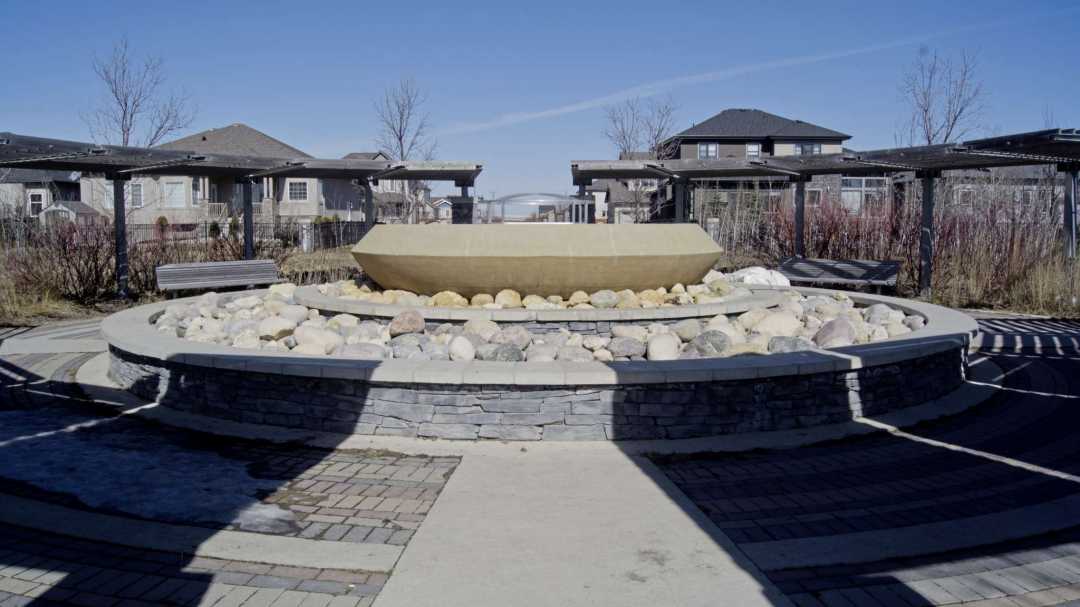 A fountain that was a major selling point for a brand-new southwest Winnipeg community is already costing taxpayers thousands of dollars.

The landmark fountain in Bridgwater Forest has been out of order for at least two years. The water feature was the centrepiece of a trails system in the community and also acted as a gathering place for residents with no nearby community centres.

“It’s awesome. It was a great meeting place for residents and it was a great feature for the area that was something that was heavily promoted as a sales feature,” Jarret Hannah, a spokesman with the Bridgwater Forest Neighbourhood Association, said.

Hannah said working with the developer, Manitoba Housing and Community Development, to get answers as to why the fountain was shut down and when it would be back in order, has been arduous.

“It’s very disheartening because we were sold on the walkable paths and trails,” Hannah said. “Part of that walk was the fountain, couple that with the school that was planned for the area being pulled, and you remove the heartbeat of the community. There was no place in our area to meet as a community.”

Responsibility for the fountain was transferred to the city in 2012. Part of the reason it has taken so long to repair the fountain was due to questions about who would foot the bill, city councillor Janice Lukes (South Winnipeg-St. Norbert) said.

“Just as the fountain came off the warranty, the fountain died,” Lukes said. “So then there was big dilemma — who’s going to fix the fountain. It’s very complicated to fix in our climate, fountains are very challenging to maintain and operate because we have to blow the lines out, like a pool.”

“The city wasn’t in any rush to fix the fountain, because there’s a lot of maintenance in an old city and the fountain didn’t seem to be at the top of the list, so I started calling around.”

Lukes said she spoke to Manitoba Housing to find out if they could offer any support and eventually agreed that both parties would work together to fix the fountain.

Manitoba Housing and Community Development’s full statement:   “The Bridgwater Forest fountain is considered a public amenity, so responsibility for it was transferred over to the City of Winnipeg in October 2012. The neighbourhood association informed Manitoba Housing last year that the fountain was not working. This feature is an important amenity in the Bridgwater community so on Jan. 15, we informed the association that Manitoba Housing would cover the cost of making the fountain operational again. This includes excavating the area, replacing the water tank and installing weeping tile to improve drainage. The City of Winnipeg may have budgeted for additional costs related to the fountain, so you may wish to speak with them to clarify. We can also confirm there was no litigation involved in dealing with this issue.”

Lukes said the City of Winnipeg has set aside $100,000 in the 2016 budget for the repair of the fountain. The problem has yet to be identified as the fountain’s mechanisms are mostly buried.

“When it’s a commercial size fountain, if the ground has settled, if they have to rebuild the casing or the housing, who knows — when you don’t really know what the cost is it’s better to estimate high,” Lukes said.

According to Lukes, the City has worked to ensure there is a more rigourous warranty for the other two fountains in the Bridgwater development.

On Jan. 15, Manitoba Housing committed to covering the costs of repairing the fountain. Due to the provincial election, a spokesperson for Manitoba Housing couldn’t provide details as to how much money the department is providing, but said it would cover excavating the area, replacing the water tank and installing weeping tile to improve drainage.

Lukes estimates that work will begin on the fountain once the ground thaws, and after repairs start a better timeline will be in place to determine when it will be up and running.

Hannah said getting the repairs taken care of has been especially frustrating from a taxpayer perspective.

“A lot of outsiders look in and say ‘Sucks to be you guys. It must be nice to have all that money and amenities.’ But in reality everybody pays their fair share of taxes everywhere in the city. And when you have something built in your area… the expectation is the tax dollars are going to something that’s well planned and constructed,” Hannah said.

“When something fails in a couple of years it’s so disheartening because, A: It was a waste of all of our money and B: We have to pay again to fix it — and hopefully it works.

“The positive that’s come out of it is that we’ve gotten to know our neighbours well, especially the people within the association,” Hannah added. “Everybody’s banded together to do something on behalf of all residents.”