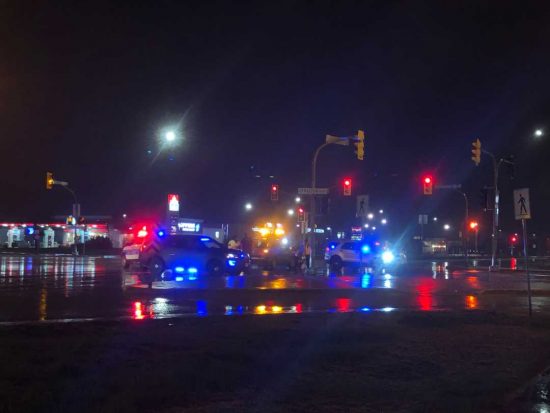 This message is for everyone, but is directed to parents  with a request that you talk to your kids about the deathly dangers of speed.

In my graduating year, two classmates died when a powerful car they were passengers in crashed and rolled. The following year, when I was 18, the doorbell rang one morning, and the Police informed my Mom, my sister and two brothers, our dad was killed in a vehicle crash. Lives changed forever. Parents, I might seem overly aggressive in my approach to road safety, and I apologize. I want to share with you what I witnessed this past Saturday night, and ask you to please talk to your kids. And please, share this message with other parents. This is the start of summer, of fun times, and hopefully, a safe summer. Your help is appreciated.

Once on Kenaston, vehicles started racing past us. Vehicles then turned northbound on Kenaston – and took off. Resident and I kept to the 80 km speed limit, but many many vehicles sped past us. It was pouring rain, roads were slick, and the resident and I figured since we weren’t going to speed and keep up with them, we would turn around. We turned around at Grant and Kenaston and headed back to Bridgwater.

On our way back, we saw a two car crash at McGillivary and Kenaston. I cannot tell you how horrible it was to see the crash, right after seeing so many young people earlier. We weren’t sure if the crashed vehicles were any that were in the group of vehicles that left Save On parking lot – but – after seeing the disregard for stopping at a red light earlier, it wouldn’t seem unreasonable to think someone may have run the red light at McGillivary and other vehicles swerved to miss and crash. I will note that McGillivary and Kenaston is one of the top collision intersections in Winnipeg. There are many high collision intersections on Kenaston, but McGillivary has the highest numbers of collisions.

I’ve made a full report to Police, including license plates of some vehicles. Dash cam’s are also handy devices. I’ve asked the Winnipeg Police Service to send ghost cars out for the future and requested they too ‘get in the line’ and follow as the vehicles leave the parking lot. As a Councillor, I cannot direct the Winnipeg Police Service to do anything; I can only report and make suggestions. I will continue to urge residents to report racing cars and associated noise. Residents must report: 204- 986-9222 or online at https://winnipeg.ca/police/report/#traffic

Area residents, the Winnipeg Police and I are doing all we can. We need your help too.

We all think we are invincible when we are young, or it won’t happen to us. But bad decisions are made every day.