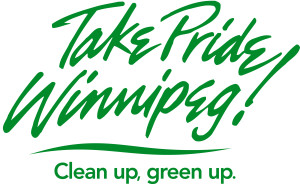 At present, two developers (Manitoba Housing and Ladco Company Limited)  and the City of Winnipeg are responsible for the maintenance of parks and open spaces in the communities of Waverly West.  The developers take care of the parks and open spaces for a pre-determined time, and then hand it off to the City to maintain. To understand who is responsible for maintaining parks and greenspace as of March, 2016, see the maps below:

Please Note: The City of Winnipeg Neighbourhood Liveablity ByLaw (Part 8 – 87-1) states that residents are responsible for maintaining that portion of the boulevard that is adjacent to their property.

Bridgwater Forest is one of three communities in the ‘Neighbourhoods of Bridgwater’.  Bridgwater Forest is the first phase of development that has almost entirely been handed over from the developer to the City to maintain (see above map).  With over 100 shrub beds and roundabouts, Bridgewater Forest has the highest level of landscaping detail of any development in the City of Winnipeg.  For details, see the map below:

The 2016 City of Winnipeg Budget does not have a line item to maintain shrub beds anywhere in the City.  This type of maintenance is only done on rainy days or if the department can accommodate it in their scheduling.

For 2016, I am allocating $13,000 of Riel Community Committee Land Dedication funding to Take Pride Winnipeg to upgrade, refresh and renew the shrub beds in the Bridgwater Forest parks space.  I am working with multiple partners on this initiative.

Starting July 5, 2016, Take Pride Winnipeg will have a total of five youth working for one month to upgrade, refresh and renew the shrub beds. The City of Winnipeg Parks staff will provide a day of training and tools to support the youth. Take Pride Winnipeg will supervise and oversee the youth. Waverley Heights Community Centre will provide lunch room space and storage of tools.  This is a short term solution for 2016.

Major changes are required within the City of Winnipeg to be able to provide the level of service which residents expect and have bought into.

Since being established in 1873, Winnipeg has changed from a small, compact community to a large, sprawling, cosmopolitan city. Winnipeg is growing at a level right now that we haven’t seen in over 15 years. This growth is putting additional pressure on the City’s operational and infrastructure budgets: 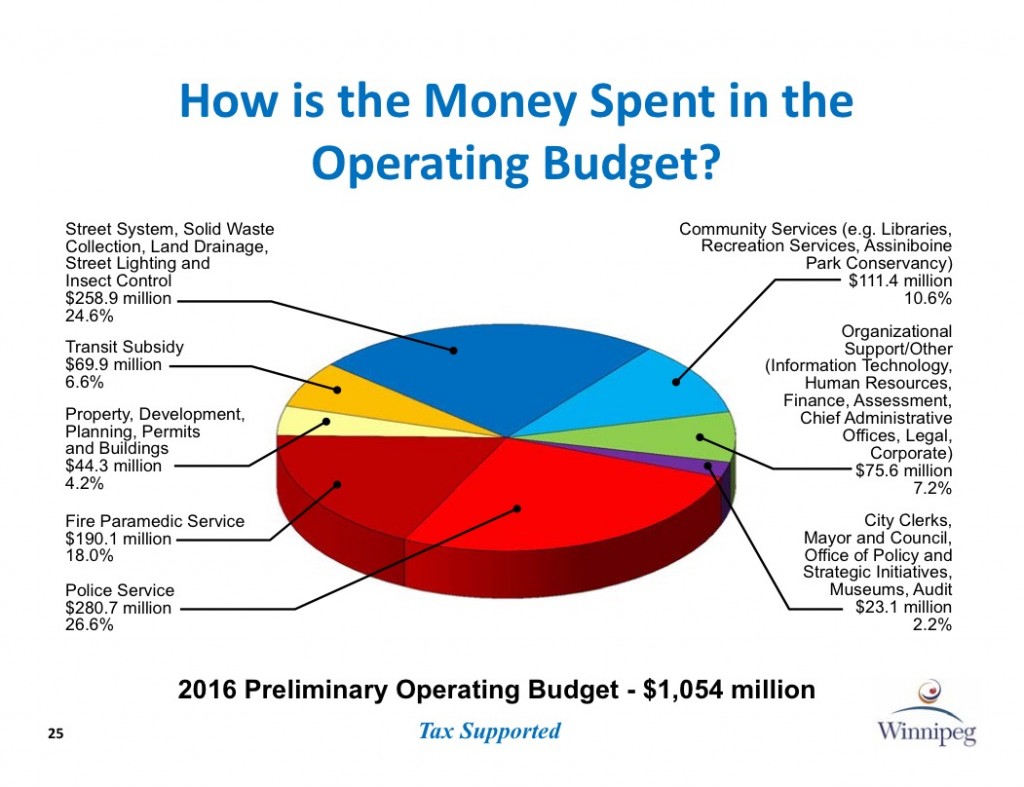 My thanks to CBC News, which has provided an excellent overview on what is having significant impact on operating budgets.

The Winnipeg Police Services` share of the overall municipal budget has increased by nearly 60 per cent over the past decade and a half, a period during which crime rates in the city have been in sharp decline.

Greater-than-inflation funding gains made by the police — and to a lesser degree, the fire department — have come at the expense of other city departments, and experts say the traditional funding model is unsustainable.

CBC News analyzed 16 years of operational budgets for the City of Winnipeg and found that the Winnipeg Police Service’s slice of the budget pie jumped from 16.9 per cent of total expenditures in 2000 to nearly 27 per cent today — a proposed $280.7 million of a total civic budget of $1.05 billion.

Over the same period, the Fire Paramedic Service`s portion of the budget has followed a similar trend, however Public Works and all other departments combined had their share of the overall operational budget decrease by 10 per cent and 27 per cent respectively.

How big is each department`s slice of the budget pie?

A further analysis of the proposed 2016 budgets for all the major Prairie cities shows that while the police budget accounts for nearly 27 per cent of the operational budget in Winnipeg, in Regina, Saskatoon, Calgary and Edmonton, proposed police expenditures consume less than 21 per cent of their budgets in all cases.

“You’ve got a situation where the police union and police managers have manoeuvred themselves into such a destructive position where their own increases are so unsustainable that an increase of three times inflation isn’t enough,” he said.

“Other departments have caught on that as they’ve been trimming and in some cases even cutting services to try to maintain that budget balance, that few or if any questions are asked about whether the police service can get by with less real-estate, or fewer vehicles or better shift structures, or fewer helicopters or armoured cars.”

Approximately 85 per cent of the total police budget is spent on salaries and benefits, the result of years of generous collective agreements settled through arbitration, said Kelcey. According to the latest compensation disclosure documents for city employees earning more than $50,000, the breakdown for police officer earnings (not including the civilian staff of over 400) is the following:

Kelcey says that police brinkmanship — that is, indirectly implying public safety could be at risk as result of not agreeing to their funding requests — does nothing to advance solutions.

In response to the CBC budget analysis, the Winnipeg Police Service has pointed out that in many years, it has actually under-spent its budget. In 2015, the department saw its smallest budget increase (1.9 per cent or $4.8 million) since 2004, and still managed to come under budget by $1.5 million.

“The same cannot be said for all city departments,” the police service said in an email to CBC News.

The department also pointed out that they have managed to reduce their share of property-tax revenues by generating ever-increasing internal revenues through both annual provincial grants of approximately $20 million and increased traffic citations and photo-enforcement.

Over the past decade, police-generated revenues have climbed by close to 40 per cent, which could represent over $45 million for this year`s budget, offsetting a significant portion of the $280 million in expected expenditures.

In their written response, the police also pointed out that if other police forces in Western Canada consume a lesser proportion of their overall budget, it`s because the overall size of their budget is much larger due to significant increases in property taxes over the years, which cannot be said for Winnipeg which froze its property taxes for over a decade.

Since the early 2000s crime as a whole has been in sharp decline, well over 50 per cent according to police-reported statistics gathered by Statistics Canada. However the Winnipeg police said this decline is not a true indication of the situation on the ground.

“What is not often talked about is the fact that demand for police services has increased significantly in that time. Dispatched calls for service are up over 30 per cent with increasing calls for non-criminal matters like runaways, people in crisis, disturbances, noise complaints and people who are intoxicated or have addictions. Today, almost 80 per cent of what police do … is not identified as traditional police work and is not represented in the crime statistics,” wrote the police.

As an example, in 2014, officers dealt with over 11,000 calls related to intoxicated persons who were detained and transported to the Main Street Project. A police spokesperson said this cost 28,000 hours of staff hours, the equivalent of 19 full-time equivalent positions at a cost of $2.3 million.

“Right now the police provide a significant amount of resources providing assistance to people in mental health crisis. We believe these people could be better served by other social service providers, freeing up police officers to do other work.”

Policing in need of a new ‘business model’: expert

The author of a 2014 study called “The Blue Line or the Bottom Line of Police Services in Canada” questions why police are increasingly engaging in non-traditional police work.

“We have by and large a one-size-fits-all approach where we have a $100,000 highly specialized individual who can essentially do everything from community policing to riot control and I would suggest that we want to make sure we deploy that very high skill set and very highly paid skill set for those situations where we actually need that skill set,” said Christian Leuprecht, an associate-professor at the Royal Military College of Canada.

“Do we need a $100,000-a-year police officer, for instance, to close a street for a parade? ” he said. “Do we need that type of highly paid individual to do crime-scene investigations?”

The Winnipeg police has indicated that over the past year and half it has “civilianized a significant number of positions” in order to reduce staff costs.

“Whether you spend more or less on policing does not in and of itself affect the crime rate one way or another. Crime is a multivariate problem that has a whole number of different drivers,” he said.

Police board says some costs out of police control

Winnipeg Police Board vice-chair Barry Tuckett says this year’s shortfall comes because of increases in salaries for officers and rising costs associated with moving to the new police headquarters.

“Unfortunately the rising costs of the police service are in many cases outside the control of the service and the board. The public control the demand for service. The criminals control the level of criminal activity. Neither the service nor the board have control over the costs of salaries and benefits as council, through collective bargaining control these costs and pass them on to the police budget,” he said.

City council will vote on the final version of the budget at a special council meeting Tuesday.