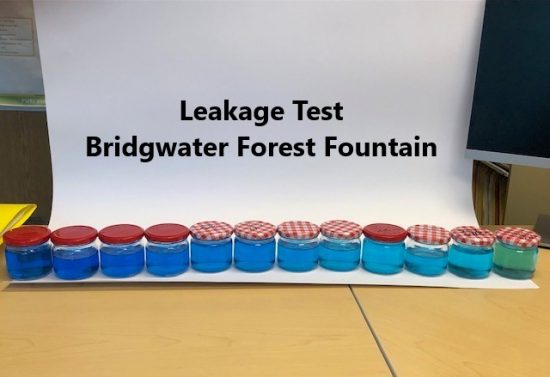 One of the iconic features of the Neighbourhoods of Bridgwater, are the stunning fountains located in Bridgwater Forest, Bridgwater Lakes and Bridgwater Trails. Nothing compares to the soothing sound of water bubbling from a fountain! But – operating fountains in a harsh climate like Winnipeg is definitely a challenge. Changing temperatures from +30 to -40, ensuring all the hoses and fountain heads have no water sitting in them before freeze up, and soil conditions that move during freezing and thaws are some of the greatest tests a fountain will face! In addition, if a fountain is not initially constructed with the utmost care given to the foundation, there will be ongoing issues. I am afraid, after years of investigation, this is the situation with the Bridgwater Forest Fountain.

A bit of history:

The parks and municipal accommodations department have concluded that the Bridgwater Fountain was so poorly constructed that additional leaks may continue to occur over time. The departments now believe the newest leak is under the large bowl.  The departments tell me no drawings of record are available, and that the public service has reached out to the original contractor for their recollection of the underground structure. They are also trying to determine who was the project engineer for the structural and mechanical design of the fountain.

It’s beyond frustrating, that City staff took responsibility for a fountain, yet didn’t oversee construction, or ask for drawings, etc. back when the fountain was being constructed. Clearly no ‘process’ was in place by the departments. I can assure you, process is now in place for fountain handoffs Lakes and Trails. Also, extended warranty periods are now placed on those fountains, and all records are being kept.

In summary, the department tells me two options can be considered for the Bridgwater Forest Fountain:

Option 2: Redevelop the site to another use

I want to thank the departments for their work to date. I have been very persistent with them and have expressed strong frustrations on why we are 7 years in with so many departments involved and still no solution. Perhaps sometimes too strongly – and thank them for their patience.

It is clear to me the fountain was not constructed with a proper foundation which presents ongoing problems.  Currently, there is approximately $70, 000 remaining in the project budget. The departments do not yet know if there is sufficient funding to accomplish ‘Option 1’. Following their excavation work this fall, they will determine a scope of work, methods, and cost estimate before they proceed with any additional work.

I’ve not asked what the cost of a replacement fountain would be, but probably in the hundreds of thousands as the existing bowls would have to be excavated and a massive rework would have to occur. I will keep residents updated and please know before ANY decision is made on removal or repurposing, I will reach out and we will have extensive conversations.  As always I welcome any feedback  you have.