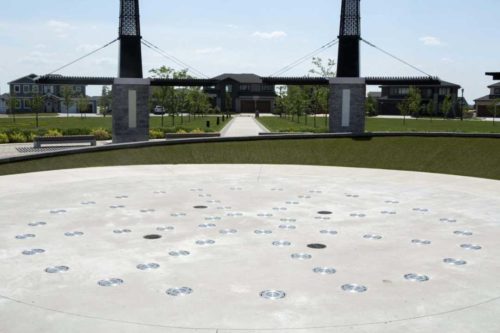 As the sun shines down on a dry spray pad in Bridgwater Lakes, neighbourhood residents are taking to social media to ask the Winnipeg’s mayor to #TurnOnTheFountain.

The fountain has been out of service for all but one day — a family neighbourhood celebration — this year. The reason being, area Coun. Janice Lukes said, the community developer (Manitoba Housing) and the city are in a contractual dispute over who is responsible to pay to run the facility.

“It’s awful. It’s very hot. It’s extremely hot — way too hot to not have (a spray pad) in your neighbourhood,” said Elena Russo Rusak, who tweeted to Mayor Brian Bowman to turn on the community splash pad several times Wednesday.

It was 31 C when she took her two-year-old son to the park Wednesday afternoon. She said her son ran over to the splash pad and touched one of the sprayers, thinking it might turn on. “He practically burned his hand because it was so hot.”

Alongside her constituents, Lukes said she, too, is frustrated “beyond belief” the fountain isn’t operational.

“The City of Winnipeg has many legal contractual obligations going on,” she said.

The Free Press previously reported Manitoba Housing said its responsibility for public areas in new developments is eventually transferred over to the city within a few years, a time requirement the public entity said it met, and exceeded, in Bridgwater Lakes.

A spokesman for the mayor said Wednesday the work to transfer the fountain to the city from developers is “actively underway.” The city can’t turn on the fountain because it’s not a city asset yet, Jeremy Davis said.

“We’re not going to go to the park when it’s 30 C out and there’s no shade, so people are more isolated on hot summer days like this. You either stay indoors to be in the air-conditioning, where you’re more isolated from your neighbours, or you’re having to pack up your whole family and leave your neighbourhood to go somewhere else.”

Stephens said part of the reason she and her husband moved to the south Winnipeg neighbourhood three years ago was because they liked the fact they could walk everywhere; the fountain is a 10-minute walk from her house.

She also took to Twitter to let the mayor know the community misses its core meeting place. The fountain is the “heart” of Bridgwater Lakes and one of the only places where neighbours can get to know each other, since they don’t have a community centre, Stephens said.

“I want the mayor to understand it’s not just a fountain.”

— with files from Aldo Santin