Dry Fountain Flowing Again As Mayor, Councillor Spray Blame At Each Other 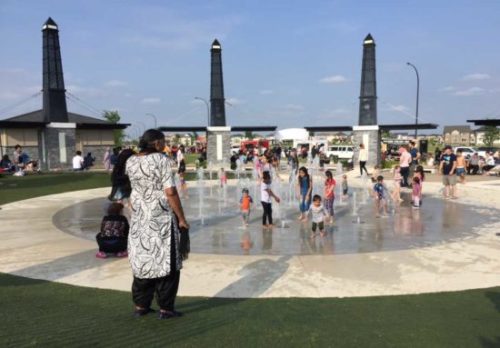 Dry fountain flowing again as mayor, councillor spray blame at each other

Mayor Brian Bowman laid the blame for the dry fountain in Bridgwater Lakes on area Coun. Janice Lukes, and what he said was her combative nature and unwillingness to work collaboratively.

Bowman said Thursday while Lukes (South Winnipeg-St. Norbert) has been working alone on the issue for months, he only learned about the problems in the suburb 10 days ago – and has already reached a tentative agreement with the province.

Bowman later tweeted the province had agreed the fountain would be turned on Friday. By late afternoon, water was flowing at the south Winnipeg feature.

“I would ask that you quote me and not paraphrase me,” Bowman told the Free Press. Lukes “has been very angry and very vocal about this issue, and I think the results speak for themselves… We’ve seen the results of the approach councillor Lukes has taken, which has resulted in the fountain being turned off.

“I’m hoping through the more collaborative discussions that our officials and I have been undertaking over the last week that we’ll be able to speed up the fountain being turned on by Manitoba Housing as soon as possible.”

Lukes said Thursday she asked for Bowman’s help to resolve the dispute between the civic administration and the province, and was surprised by the response.

“I sent him two politely-worded letters asking him for his help and then he attacks me,” said Lukes. “He wants everyone to be collaborative, except himself.”

Lukes had been working behind the scenes with city staff and provincial officials to have the fountain, which doubles as a public splash pad for area children, to be turned on. The fountain is one of several public amenities constructed by Manitoba Housing, which developed the Bridgwater neighbourhoods.

While it’s typical in development agreements for the developer to maintain public amenities for a certain period of time, ownership always reverts to the city when the warranty has expired.

Lukes has been pressuring the city to assume ownership of the fountain and playing fields in Bridgwater and in neighbouring South Pointe (built by a different developer), but she said she suspects officials don’t want the responsibility because they don’t have the funds in their budgets.

Lukes said the warranty on the fountain expired in October, and she doesn’t understand why any concerns haven’t been resolved. Before Friday, the water feature had only been on once this year.

A spokeswoman said the province is prohibited from making any announcement as a result of the coming byelection in St. Boniface.

Lukes said the city still needs to resolve the issue of taking ownership of all the public amenities constructed by the developer.

“The mayor keeps telling me that I should be working with administration and not trying to politicize issues, and that’s what I’ve been doing on this for months, but I’ve hit a wall and I asked him for help,” Lukes said. “I’m frustrated and the residents are frustrated.”