History Of The Fairfield Park Name 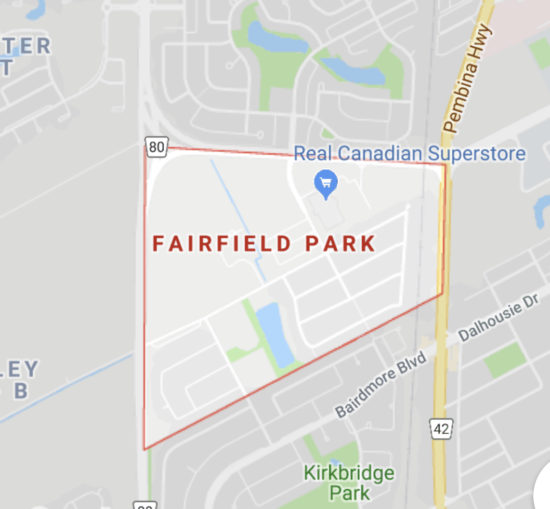 Staff noted that while much of the growth and development of the Fairfield Park area has taken place over the last 20 years, the name “Fairfield” has a longer history. One of the streets in the area, Fairfield Avenue, was established by the original subdivision of the river lots. Known as Fort Garry Park, this subdivision was registered with the land titles office in 1912. It included the following streets: Fairfield, Pandora (now Colby), Fort (now Lee), Camrose (now Comdale) and others. The Rural Municipality of Fort Garry also dates to 1912, meaning Fairfield Avenue is as old as the municipality. Unfortunately, the Minute Books from that time period don’t record why the name “Fairfield” was chosen, and while it was a common practice to name streets after past and current property owners, Voters Lists and directories do not show any residents named Fairfield. In short, the name can’t be traced to any particular individual or family at this point.

For many years, it was a low-density area with little development. In 1972, along with other area municipalities, Fort Garry joined the City of Winnipeg. The City began receiving requests from landowners to extend municipal services to this area in 1978. There was also interest in subdividing the land further. A series of consultations with landowners and residents was held. These proceedings ultimately led to the creation of the Fairfield Park Local Improvement District proposal, which was adopted by Council in 1999. The land was re-zoned to allow for multiple single family developments, and a number of new homes were built.

Fairfield Park was also known as the Bison-Letellier area, but the name “Fairfield Park” seems to have grown in popularity starting in 1987. References to the “Fairfield Park Residents Group” suggest that it was the preferred name for the area in the 1990s. Notably, one former resident identified a park on Fairfield Avenue as the neighbourhood’s namesake (Gerald Flood, “Fairfield Follies, Act II,” WFP, 26 April 2000). The park is no longer there. Prominent greenspaces that existed prior to the area’s re-development may also help to explain how the neighbourhood acquired its name.