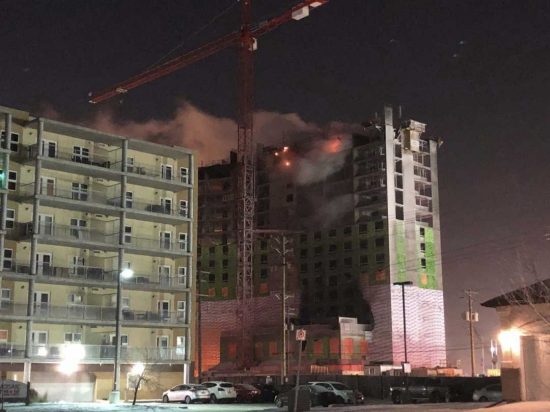 Video camera recordings indicate the fire at 2525 Pembina appears to be arson. If you have seen anything suspicious, even the smallest occurrence that seems odd, please contact Winnipeg Police at 204-986-6222.

Arson is suspected in last month’s blaze atop a highrise construction site on Pembina Highway, according to the developer behind the now-delayed university student apartment building.

“I’m still in disbelief that there’s people who would do it, period,” Henry Morton, president of Campus Suites, said Tuesday.

Morton said the arson suspicion was based on video captured by cameras installed to monitor construction progress at the site near the University of Manitoba’s Fort Garry campus.

“It’s quite clear that there were individuals that entered the building and exited at the appropriate times to deem it to be arson.”

More than 100 firefighters responded to the early-morning fire Dec. 21 at the 16-storey structure at 2525 Pembina Highway. One firefighter sustained a minor injury.

The project, called the Arc, is to include 368 furnished rental units, with 570 beds. It was previously scheduled to open by September 2020, but Morton now believes the project will likely be delayed until the following school year.

The 16th floor is unrecoverable and will have to be completely rebuilt, said Morton. Otherwise, he said the building’s integrity “is certainly not an issue,” although materials on lower floors will have to be replaced.

“Any drywall, any steel studs, all the lower floors are actually having it removed entirely, and we’re going to be building that up from scratch.”

Because of earlier concerns regarding the building’s structural integrity, a City of Winnipeg spokesperson wrote, the Winnipeg Fire Paramedic Service had been “unable to complete a full investigation on the cause before responsibility for the scene was turned back over to the owner.”

The investigation has since been turned over to the Winnipeg Police Service major crimes unit, spokeswoman Const. Tammy Skrabek wrote in an email Tuesday.

“Our investigators were unable to conduct an investigation in the building, as the structure has been deemed unsafe to enter,” wrote Skrabek. “As a result of this and limited witness information, the investigation is on hold, pending additional information.”

It was not clear Tuesday if the WPS had viewed the security camera footage.

Morton said the top floors of the building have recently been made safe for workers to enter, but it’s too early to provide an estimate for the damage from the fire.

“As a result of the work of the fire department, we, unfortunately, have a fair amount of ice in the building, so we’ve had to figure out the very basic things, like how do you melt a half-inch of ice on various floors?”

Morton said he is disappointed someone would damage the student housing development for no apparent reason.

“We work hard at what we do, we spent a great deal of money in the community. And to think that there are (alleged arsonists) who have no regard for buildings like this, for the impact on the community, it’s very disappointing.”

— with files from Maggie Macintosh