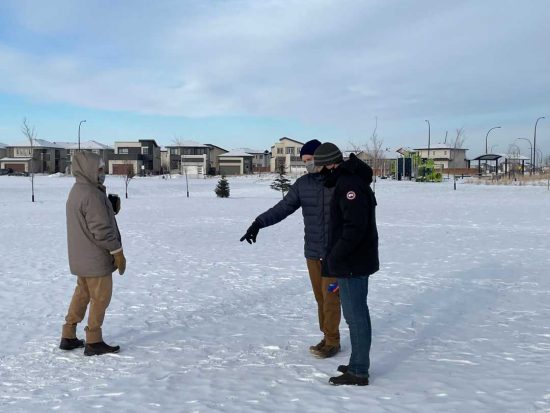 Some not so good news combined with good news!

I wanted to update residents on efforts to establish a skating rink in the Eaglewood Park. In new developments, the developer builds the parks, and maintains for a couple of years, then the City take on the responsibility of care and maintenance.

Many residents have contacted my office – wanting to see a pleasure skating rink installed at Eaglewood Park, but that was not possible till the City took ownership of the park. The Parks department staff build pleasure skating rinks on grass, by banking snow and flooding on a regular basis. Now that the City has ownership,  I’ve had park staff out analyzing an area for the pleasure rink and there is a large challenge we’ve encountered.

Not so good news:

I thought the rink could be placed closer to the sidewalk where the ground is flatter – but after more analysis, it turns out the water truck needs 12 feet to drive all around the rink to flood it. So, we’ve come up with a solution but regrettably it won’t happen till next year.

So, it’s disappointing that a rink couldn’t be built this year, but we now have ownership of the land and will order a rink kit to have installed in winter 2022.  If you have questions or concerns, please contact me at jlukes@winnipeg.ca