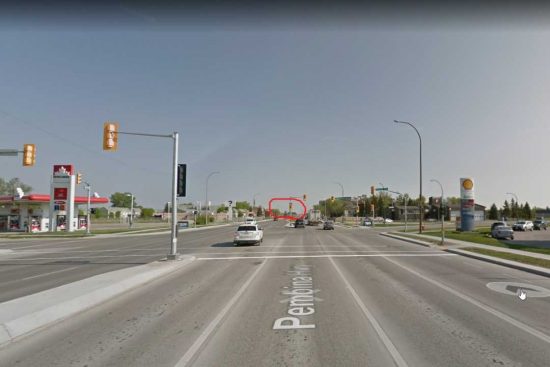 I’ve received many requests for the installation of a left turn signal at Pembina/Dalhousie/Bairdmore (south) intersection. I had the engineers in the Public Works department study this intersection in 2017 (See Report) and then had them go out this past summer and look at the intersection again. I am not thrilled about the update, but – appreciate they studied this again:

A cycle-by-cycle observation was undertaken during the PM peak period and the collision history was reviewed. This intersection meets the primary criterion (left turn demand exceeds two vehicles per signal cycle for at least four hours of a typical weekday). However, none of the additional criteria are satisfied and therefore the overall warrant is not met.

To warrant installation of a separate left turn phase, the primary criterion of the Technical Guideline and Practice must be fulfilled: the left turn demand must exceed two vehicles per signal cycle (60 vehicles per hour) for at least four hours of a typical weekday.  If the primary criterion is fulfilled, the left-turn phase is considered warranted if either of the following are satisfied:

OR if any of the following two are satisfied: