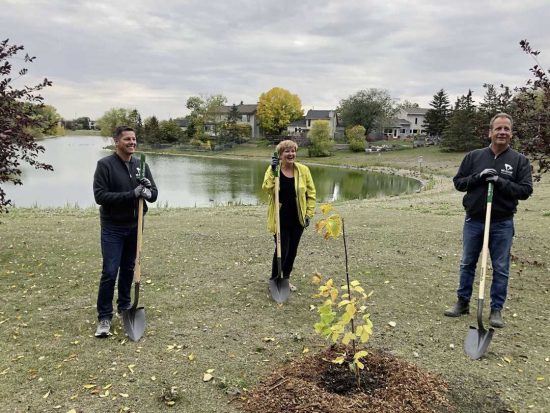 Great tree planting in fall of 2020! Over 100 trees planted – thank you Susie Strachan of the Sou’wester community newspaper for covering this great activity!

On Sept. 22, which is part of National Tree Week, volunteers, foresters and politicians took up shovels to dig holes, apply mulch and water the new trees, which ranged in variety from Manitoba maple to the province’s official tree, the white spruce.

“Trees provide shade, shelter, biodiversity among animals, birds and insects, along with providing aesthetic beauty and opportunities for recreation and education,” said Ken Fosty, a Manitoba community advisor for TreeCanada, who was teaching 15 volunteers from IKEA in Winnipeg how to properly plant a tree. “They also provide soil stabilization. Best of all, they give us clean air to breathe.”

Munson Park in Crescentwood saw 16 young trees planted, including Manitoba maple, cottonwood, hackberry and butternut; the last is a tree that is also known as a white walnut, and which normally is planted in warmer climates. Fosty said the butternut is being tried in Winnipeg, as climate change sees the city warming up.

Each tree was provided with a mulch blanket, and a wire cage to keep the deer and rabbits from eating the bark.

“The mulch blanket will prevent weeds, and helps the soil underneath break down and go into fertilization mode,” Fosty said.

Daevid Ramey, the leader of the IKEA volunteers, said the store has been volunteering for eight years at the tree planting event.

“It allows us to give back to the community,” he said. “And we get to be outside on a great fall day. It doesn’t take much coaxing to get volunteers.”

After finishing the Munson Park planting, the group moved to FortWhyte Alive, where they planted 75 white spruce near Lake Cargill, under the direction of Fosty.

“I worked with FortWhyte a number of years ago on how they can diversify their trees. They have a lot of aspen and willow in this area near the lake. So they have been adding the spruce trees,” Fosty said.

Each volunteer received a small white spruce growing kit, which contains seeds and acts like a small greenhouse to protect the seedling until it’s ready to plant next spring. White spruce can grow up to 25 metres in height and can live for up to 200 years.

Coun. John Orlikow (River Heights) was on hand at the Munson Park planting, along with Winnipeg mayor Brian Bowman. Later in the day, the duo joined Coun. Janice Lukes (Waverley West) in planting a maple at Point West Park in South Pointe.

Lukes credits South Pointe resident Matt Dunk with the idea to plant trees at this park. On his part, Dunk said he came up with the idea to use trees to help visually screen the traffic passing by the park on nearby roads.

“The mayor came out to plant the maple tree,” Dunk said. “We’ll be getting six more from the City and will get volunteers from the neighbourhood to plant them on Oct. 3 and 4.”

The City will also care for all the newly-planted young trees, applying fertilizer, watering them and protecting them from animals that find the bark tasty.

“My son, Oliver, is two-and-a-half,” Dunk said, adding his home looks out over the pond in the park. “It will be cool to watch him grow up, along with these trees. We’ll be able to watch over the trees.” 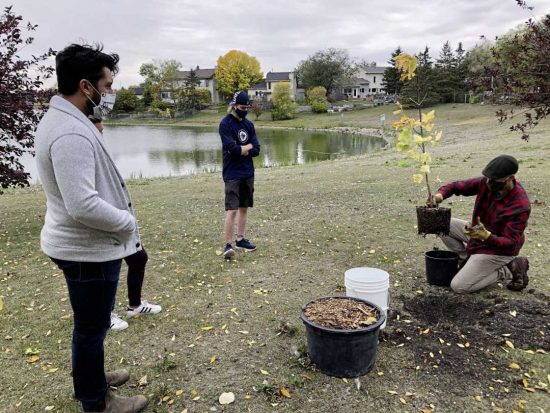