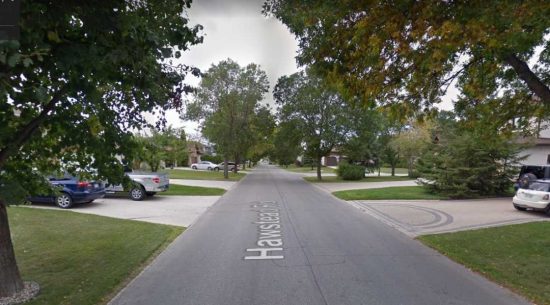 In early January 2019 – residents of Hawstead Road contacted me to discuss speed and traffic volumes on their street. A meeting was organized at Smittie’s to hear their concerns.

Following that meeting, I moved a motion to have the Public Works Department engineers study the street to identify the problems and present some solutions. (motion below)

I encourage you to read the report in detail. The report found that this street WAS eligible for traffic calming, and two options were presented. It is important to note that there are more options that could be considered, but the Public Works engineers presented two they felt would deal with the issues on Hawstead. I am a huge fan of speed tables – which slow traffic, but are not as effective in ‘re-routing’ traffic.  These are also a possibility but not as favoured by the engineers.  It is important to note:

In June, I invited the City engineer who had written the report to a zoom meeting with the residents of Hawstead. The engineer discussed the issues and two solutions that were presented.

The engineers was to provide a summary of the meeting with action items, suggestions of time to restrict turning, and other things to consider. I was told this week (August 11th) that the engineer is now on a leave and someone else is taking over the file.

The City and I are open to recommendations, thoughts, concerns. Again, nothing will happen prior to reaching out to surrounding streets.  Please email any feedback to: jlukes@winnipeg.ca

WHEREAS prior to the construction of homes in Waverley West, Hawstead Road had issues of speed and large traffic volumes;

AND WHEREAS speed and traffic counts along Hawstead Road were studied in the early eighties and at that point in time, engineers looked at traffic calming measures but none were applied;

AND WHEREAS Hawstead Road is a major cut through street for residents of the new developments in Waverley West and continues to experience increased speed and large traffic volumes;

AND WHEREAS Hawstead Road is a major cut through street for residents of the new developments in Waverley West and continues to experience increased speed and large traffic volumes;

THEREFORE BE IT RESOLVED that the Standing Policy Committee on Infrastructure Renewal and Public Works be requested to direct the Winnipeg Public Service to conduct a new speed study and traffic count along Hawstead Road between Bairdmore Boulevard and Kirkbridge Drive, and report back to the Standing Committee with recommendations for traffic calming infrastructure.