I was informed yesterday (November 14, 2016) that the asphalt contractor who was to install the speed table pilot project on Kilkenny Drive (between Kings Park and Patricia Avenue)  would not be able to do so until spring, 2017.

At this time of year, road contractors are extremely busy finishing large projects before snowfall.  This year, the City of Winnipeg invested a record amount of funding into road projects (over $103M) and contractors have been working around the clock.

I apologize for the delay, but hope residents are enjoying the new sidewalk alongside Kilkenny Drive.

Kilkenny Drive is currently undergoing a rehabilitation, from south of Kings Park to Radcliffe Drive. The sidewalk along Kilkenny is also being extended from King’s Park to Radcliffe. These upgrades will  improve driving and pedestrian conditions for the next 40+ years.

Since being elected in Fall, 2014, I’ve received countless calls and E-Mails from area residents asking for:

Upgrading Kilkenny provided the ideal opportunity to address these concerns:

SIDEWALK:  Installation of a 1.8 meter sidewalk as part of the Kilkenny rehabilitation now provides pedestrians a designated space separated from vehicle traffic.  Some of you may know I had participated with community groups on many projects focusing on improving walking and cycling in Fort Richmond prior to being elected.

STOP SIGNS: Stop signs are installed to control traffic direction, not speed reduction. When installed incorrectly, they actually become more dangerous as people do not stop.

SPEED TABLES: Because Kilkenny is a collector street used by emergency vehicles, it is not eligible to have traditional speed humps installed to reduce traffic speed. I’ve been working with the City’s Public Works department to pilot a variety of traffic calming devices in the South Winnipeg–St. Norbert Ward. You may be familiar with the ‘raised crosswalks’ on Dalhousie Avenue, in front of Ryerson School. These raised crosswalks reduce the speed of traffic on Dalhousie, and enable designated areas for student to cross. They are proving very effective but are not suitable for Kilkenny Drive.

Working together with the City’s Public Works Department, I’ve initiated and am supporting a PILOT PROJECT to install a series of traffic calming devices called “speed tables” along Kilkenny to reduce speed and calm traffic. Speed tables are somewhat similar to speed humps – but are lower and flatter, and enable emergency vehicle access.

Speed tables are constructed of asphalt, are painted and signed, and are alternated in opposite directions on the street. Speed tables physically change the street conditions, yet maintain a constant flow of traffic and encourage vehicles to slow down. Snow removal can occur throughout the winter, and they will be re-painted each spring. See the diagram below showing where the speed tables will be installed (click on image to increase its size): 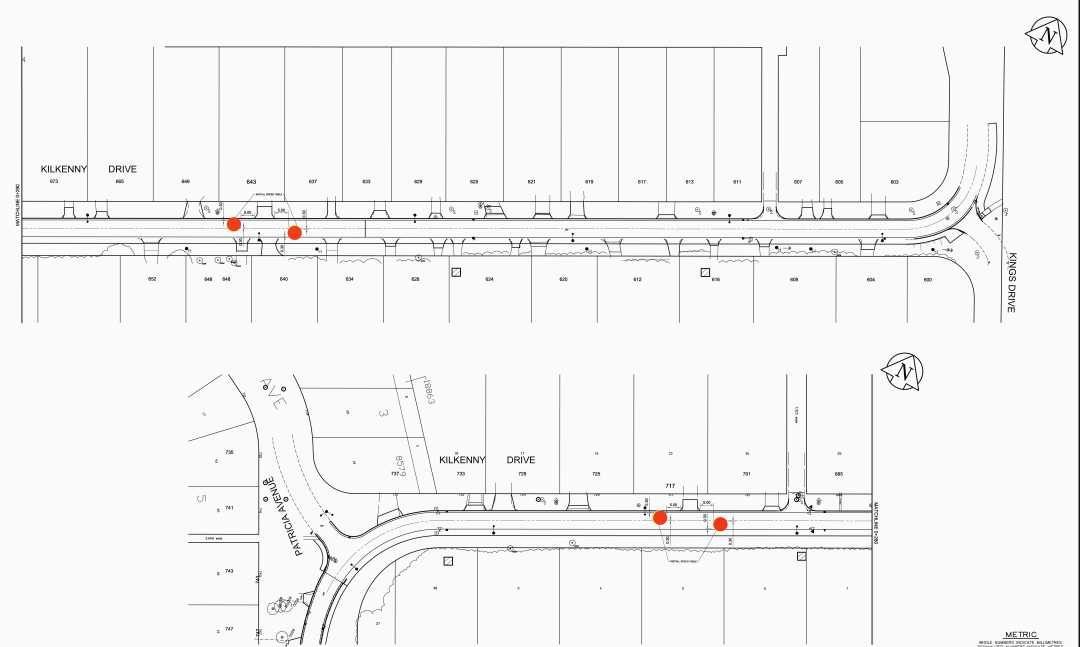 PLEASE NOTE:  This is a PILOT PROJECT that I am supporting, and it will be assessed in Fall of 2017. If residents are in support of the tables, we will leave them in. I am optimistic that residents further down Kilkenny may also be interested in having speed tables installed, thereby calming traffic from Radcliffe to the South Perimeter bridge.

Please feel free to contact me at any point in time with your feedback on the speed tables. We will take all feedback into consideration over the duration of the pilot project.  Please E-mail jlukes@winnipeg.ca with your comments.