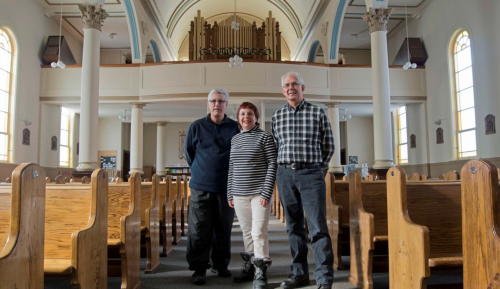 There’s such an incredible history in St. Norbert, and this community’s story is still continuing to evolve.  Beginning in September, Paroisse Saint-Norbert (Parish of Saint-Norbert) will re-introduce English language mass.

If you have never stepped inside this beautiful church at 80 Saint-Pierre street, take the time to do so – it’s really worth a visit!  It was established by Roman Catholic missionaries as St. Norbert’s first parish church in 1857.  Over 130 years later, the chapel was declared a Manitoba provincial heritage site in 1989.

One of the city’s most historic churches is changing the language it uses to greet the community.

The Paroisse Saint-Norbert (Parish of Saint-Norbert) will introduce English language mass after 40 years of Francophone worship and study.

The church community was founded in the mid-1850s, and at the invitation of Abbot Noël-Joseph Ritchot was a meeting place for Louis Riel and the resistance he led. The parish’s priest, Ritchot was also part of a delegation that negotiated the province’s entrance into confederation. He is entombed in the crypt below the church located at 70 rue St-Pierre.

Bernard Lemoine, a member of the parish council and part of the group organizing the reintroduction of English mass, said there is no shortage of Catholics in the area, but the church has struggled to attract new members as an exclusively Francophone parish.

“Our numbers are coming down and that’s natural; it’s a problem that everyone is having,” Lemoine said. “So the main thing is to bring the community here, revive it, and get it known.”

Lemoine said two years ago, parishioners began talks about the future of the church and decided there were three ways to move forward: to remain as is, to bring in English services, or amalgamate with other nearby parishes.

“We wanted to maintain St. Norbert as St. Norbert and its history,” Lemoine said. “So a good majority voted for an English mass and to go back to bilingual.”

In its earliest iterations, the Paroisse Saint-Norbert was a French-speaking community, but as development occurred in the St. Norbert area, English was informally incorporated into services, according to local historian Philippe Mailhot.

“St. Norbert changed dramatically in the late ’50s and early 1960s from a very predominant Francophone community (there were bilingual masses and so on) to a much more mixed population of not only Anglophones coming in,” Mailhot explained. “There’s a lot of history and a lot of transformation here.”

Michelle Wowchuk, longtime member of the parish and a St. Norbert resident, said the church was bilingual until the late 1970s when Mary, Mother of the Church was formed in the Fort Richmond community. The intention was that Mary, Mother would serve Anglophones, while St. Norbert would cater to Francophones.

The arrangement worked for a long time, Wowchuk said, but with more families speaking English it was time to reach out and return to bilingual services.

“It’s important for the whole community to have it in both languages,” Wowchuk said. “We want to make it more accommodating for the whole family.”

Wowchuk said there are already members of the parish who would attend the English mass and the church is extending an invitation to people in Bridgwater and South Pointe to visit the historic building.

“It has to change for the community,” she said.

Mailhot contends that with the introduction of English, the Francophone community at St. Norbert will persist and possibly grow while more people will be introduced to the history of the Métis and French-Canadian settlement.

“I think it provides a wonderful opportunity for the non-Francophones of south Winnipeg, whether it’s the newer areas, Fort Richmond or St. Norbert itself… for people to become a part of one of Manitoba’s most historic parish communities,” he said. “It’s steeped in history and that belongs to everyone. It’s not just a French story or a Métis story.”

The first English masses will be held in September to coincide with the parish picnic. For more information, contact the church at 204-269-3240.

PHOTO: From left, Bernard Lemoine, Michelle Wowchuk, and Philippe Mailhot are pictured in the sanctuary of Paroisse Saint-Norbert, a church steeped in Manitoba history. The church will reintroduce English mass this fall.  DANIELLE DA SILVA – SOU’WESTER