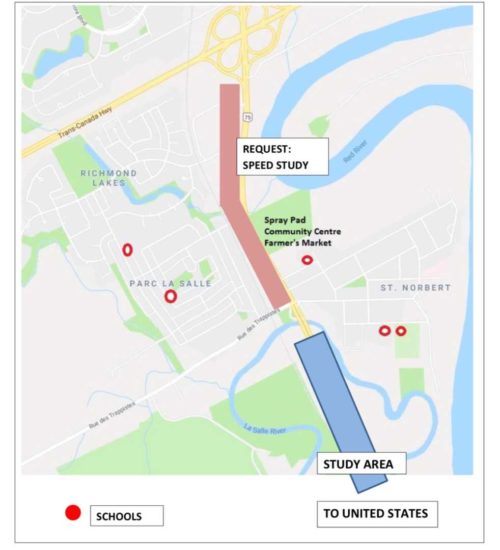 As background information, the segment of Pembina Highway which lies south of the La Salle River Bridge underwent a speed limit review in 2017.  Winnipeg’s Public Service Report on Speed Limits on Pembina Highway South of the La Salle River Bridge is recommending to increase the existing speed limit from a 60 km/h zone to a 70 km/h zone (blue area in image), subject to public engagement and approval by the City’s Standing Policy Committee on Infrastructure Renewal and Public Works (SPC-IRPW).

A public engagement was held on November 30th in St Norbert and the Public Engagement Survey Results were presented to SPC-IRPW. It is important to note results are not statistically relevant but are intended to provide insight into levels of support and respondent rationale. The public consultation highlighted many valid points.

Residents who live just south of the La Salle Bridge did not want the speed to be increased. Residents who live in the community of St Norbert asked for a more comprehensive speed study to occur in the ‘town area’ before any final decision was made. Residents felt the existing study did not look at the ‘big picture’ of how speed can impact a residential community. Residents believe speed is an issue in the ‘town area’. Residents have concerns about children crossing Pembina in St Norbert to go to school, and have safety concerns about the increased volume of pedestrians crossing Pembina with the soon to be open year around Farmers’ Market. The cycling community also raised valid points related to the dangers of speed. It is also important to note:

Residents and I would like to see a more comprehensive study of speed before any final decisions are made. I have long worked in the field of active transportation and the vulnerable road user for over a decade, and am very rarely a supporter of increasing speed.