U of M’s Vibrant Vision For Southwood Unveiled 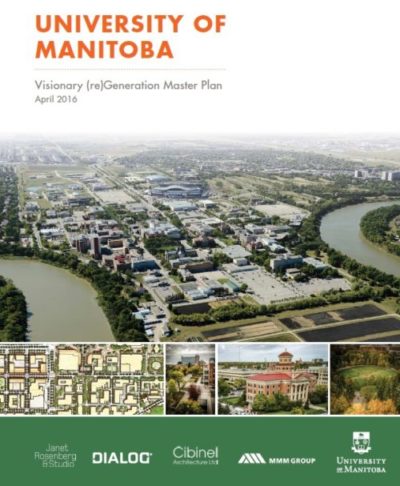 The University of Manitoba is having more discussions about the development of the Southwood lands. Recently they announced a Board of Directors to oversee development.  The Winnipeg Free Press is covering a luncheon where the University is discussing a vibrant vision for the lands. I am assuming they are referencing the Visionary (re) Generation Plan . It’s always good to see discussion occurring. I look forward to the construction of affordable student housing on campus.

U of M’s vibrant vision for Southwood unveiled

University of Manitoba administrative vice-president Andrew Konowalchuk outlined the university’s Fort Garry campus development plans, including those for its upcoming Southwood Lands development, to a group of industry stakeholders Wednesday afternoon, about one month after a board was appointed to oversee the Southwood operations.

It’s long been known that the Southwood development would feature mixed housing, but the area is projected to house anywhere between 1,200 and 1,800 residential units within its first 10 years, along with roughly 500,000 square feet of commercial retail space, Konowalchuk told guests at a luncheon thrown by the Building Owners and Managers Association of Manitoba. “We certainly see Southwood as a foundation of our future on campus,” he said.

In 2008, the university’s purchase of the 120-acre parcel of land from the Southwood Golf and Country Club was finalized, and in 2011, U of M officially acquired it. In 2012, the university held an international competition to determine plans for the property; Toronto-based landscape-architecture firm Janet Rosenberg and Studio won, and planning has been ongoing since 2014.

Though there is no timeline regarding the start date for the Southwood development, Konowalchuk said he hopes the project will help the university transition from a commuter institution into a “destination” with stores, restaurants and other businesses.

“We need the development community and private investors to come to the table and see the same vision that we have around a vibrant, walkable, dense, compact, urban-feeling development adjacent to the Fort Garry campus,” he told the Free Press.

Southwood represents an opportunity for large-scale market-driven development, an undertaking the university is familiar with after its experiences with SmartPark, a collection of buildings and office spaces on U of M property leased at market rates to external tenants, a group mainly comprising science, technology and research firms. Eighteen companies currently lease space in the SmartPark, and a newly built four-storey facility still has vacancies, Konowalchuk said.

The university consulted with more than 1,000 students, faculty and neighbourhoods in the Southwood planning process thus far, and also consulted with Indigenous leaders and elders.

Bus rapid transit infrastructure is already in place at the Fort Garry campus, but Konowalchuk said he isn’t concerned about the additional transit load a new residential area could create; since planning began, the university has consulted with the city’s planning and properties department, Winnipeg Transit and Manitoba Hydro. Konowalchuk said future plans include creating an additional four-lane roadway between Markham Road and the existing BRT line.

“It’s really up to that group to get shovels in the ground,” Konowalchuk said.