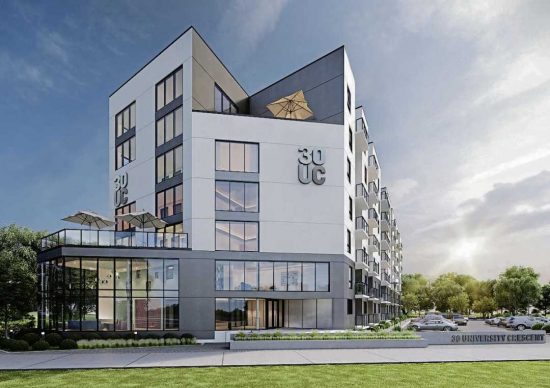 Thank you to the Sou’Wester for covering this story

With the turn of a dozen gold plated spades, the developers of major infill project in University Heights officially broke ground on a multi-family complex promising to add “affordable luxury” to the neighbourhood.

The seven-storey, 104 unit apartment at 30 University Cres. is the latest infill project by Nigel Furgus and Joel Rodrigues, making new use of the 1.3 acre lot on the edge of a mostly single family residential neighbourhood.

“This is a combination of a vision that Nigel and I had and we did our best to include all the right partners to make the project successful,” Rodrigues said.

“We think there is a void in Winnipeg,” Furgus added. “To bring in a high-end product at an affordable rate, it’s rare in Winnipeg, but with the ability to do so and the partners that work together, we were able to bring it in.”

Sited at the corner of Pembina Highway and University Crescent, Furgus said the new concrete and steel construction is expected to be home to a diverse group of tenants — everyone from students at the University of Manitoba, to empty nesters, immigrant families, and young professionals.

It was with this target market in mind that the developers worked with the Canadian Mortgage and Housing Corporation, which insured a mortgage through CMLS Financial, for up to 95 per cent of the total construction costs. In exchange, the rent for the 104 suites will be below 30 per cent of the median household income and priced 10 per cent below the rent potential for 10 years.

Furgus said the development is a $25 million investment in the community and will include a 60-40 split of one and two bedroom suites along with underground and surface parking spaces. The apartment also has a rooftop terrace and amenity rooms, balconies, and four furnished suites designated for short term rentals by tenants hosting family members or guests. Suites will be outfitted with high end appliances, quartz counter tops, and luxury vinyl plank flooring.

“We worked really hard to bring a high-end product at an affordable price,” Furgus said. “As developers and with our partnership group, we’re going to continue to do affordable luxury rentals, where we bring a price point that’s under the market, but the level of finishing is above market.”

“It’s nice to be able to give someone this quality of living at a price that’s more affordable,” Rodrigues added.

Lukes said in the past four years over 1,200 new rental units have been approved in neighbourhoods surrounding the University of Manitoba, primarily along south Pembina Highway and on University Crescent.

The spurt of development has been encouraged by demand for housing in south Winnipeg, particularly students searching for safe, affordable, and accessible accommodations near the university.

“So much has turned into basically poor landlord, rental housing, on University Crescent,” Lukes said. “There are some really nice single-families left, but really, this is a major corridor into the university… and this was a fit.”

Other upcoming developments include a 110-unit complex at 80 and 84 Snow Rd., 410 apartments at 3021 Pembina Hwy., and a 570 bed furnished, student-oriented housing complex currently under construction at 2525 Pembina Hwy.

Lukes said there is still more capacity in the neighbourhood for infill development and the City of Winnipeg is waiting to hear the University of Manitoba’s plans for the Southwood lands before embarking on a development study for the area.

“The University of Manitoba has the lowest on-campus rate of housing for students in all of Canada in the top 15 research universities — very disappointing,” Lukes said. “But it’s amazing private investment… that is helping solve this challenge that we have.”

Furgus said Paragon Design Build is also working on affordable housing projects at 584 Gertrude Ave. and 653 McMillan Ave., which he anticipates will be supported by the CMHC.

Furgus said occupancy of 30 University Cres. will occur in fall 2020 and be managed by Towers Realty.