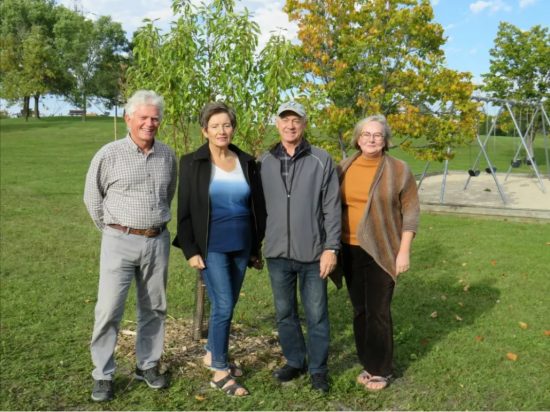 Thank you so much to area residents who have ‘adopted’ a park and are transforming a once rather barren landscape into a park paradise. I’m very pleased to be working with the team and providing some financial support towards this transformation of greenspace! If you are interested in ‘adopting a park’ please check out this information: Adopt a Park

It takes a village

While many of us are busy putting our home gardens to bed, Debbie and Stuart Innes, along with neighbours and master gardener volunteers, are completing a range of tasks to prepare the many new shrubs, trees, and perennials for winter that have recently been planted in their neighbourhood park. Albrin Park is located at 40 Lake Albrin Bay in Waverley Heights in south Winnipeg.

Debbie and Stuart Innes began supporting and advocating for their neighbourhood greenspace more than 25 years ago. At first the changes were subtle. Debbie would keep a watchful eye on the few trees in the park and waste no time in contacting the city if mechanical injury by city workers’ equipment to the bark of trees resulted in a tree’s death or gradual decline. She also added flowers to the park’s two sparse flower beds from plant divisions in her own garden and began organizing working bees each fall where neighbours would gather to tidy up the park and visit with one another afterwards over coffee and snacks.

When my children were young, I often took them to Albrin Park to play on the play structure and to climb to the top of the hill, a main attraction of the park that continues today for children and grownups alike. The vantage point, complete with benches and the shelter of mature trees, provides for an expansive view of the park and the growing neighbourhood that surrounds it.

My children are grown now and when I revisited Albrin Park for the first time in 2021, I immediately got a sense of the many changes. But this year, the progress has been even more dramatic. Albrin Park is not only more beautiful and functional, it is well on its way to becoming a climate-ready greenspace. This year, two naturalized areas at Albrin Park were planted with several dozen trees and shrubs and new flower beds were completed. Let’s explore some of what it took to make the momentous changes happen.

Stuart and Debbie work closely with Ian Wise, their neighbour, and Loressa Klassen, a master gardener, and together they form an official committee which they call the Albrin Park Tree Enhancement Project. Funds provided by the city gave the members of the Albrin Park Tree Enhancement Project the opportunity to purchase 59 trees and shrubs, several of which they planted this year with the help of two additional volunteers. “Six of us planted 37 trees in one day,” says Debbie, who is a master gardener. The remainder of the trees and shrubs will be planted in 2023. Varieties include American hazelnut, pincherries, Pembina plum, Saskatoon serviceberry, Viburnum nannyberry, bush honeysuckle varieties, and more. Many of these plants provide seasonal flowers, edible berries, and brilliant fall colour as well as essential food and habitat for pollinators.

The goals of these ambitious volunteers include other practical considerations such as the cooling shade and wind protection that the trees and shrubs will provide for the children’s playground area and pathways. They also planted rows of trees and shrubs to create a windbreak in an area of blowing snow. In addition, 13 large caliper trees were planted by the city. Varieties include Delta Hackberry, Discovery and Night Rider Elm, Spring Snow flowering crabapple, Dropmore Linden, Tatarian maple, and Ivory Silk Japanese Tree Lilac.

A major project, one that has been close to Debbie’s heart, involved the creation of a tallgrass prairie garden. First, to learn about tallgrass prairie reconstruction, Debbie registered in a course offered by John Skinner who owns Skinner Native Seeds. Skinner provided her with a grass seed mixture consisting of Big Bluestem, Little Bluestem, green needle grass, Blue Grama grass, and June grass as well as a prairie native flowering plant, purple prairie clover. “I added more grasses – rattlesnake mannagrass, bottlebrush grass, tufted hair grass, giant wild rye, Prairie Dropseed, and Sorghastrum grass. The rattlesnake mannagrass was given to her by Joshua Pearlman who works in the city’s naturalist services branch. Debbie also seeded Many Flowered aster, Smooth Aster, and Showy Goldenrod from seed which was obtained from the Winnipeg Wildflower Project. “We moved plants from some of the other flower beds such as New England aster and false sunflower,” says Debbie. Last summer, Debbie and another master gardener, Igor Kaftan, began planting the tallgrass prairie garden which was created without any funding. Planting was completed this summer with the assistance of master gardener volunteers who are members of the Manitoba Master Gardener Association. “I have plans to add Purple Oat grass and explore a few other grasses,” says Debbie. “I don’t know if it would pass inspection as a true tallgrass prairie garden but I find it a pleasing mixture.” 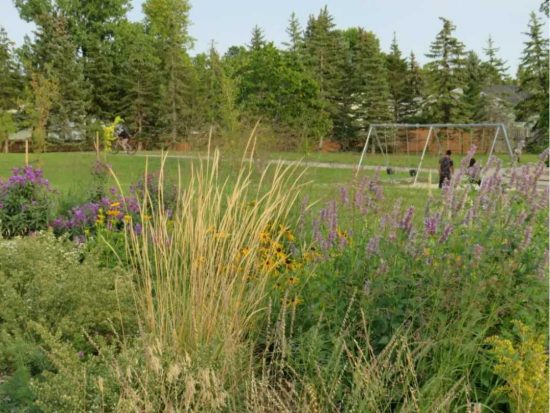 The new tallgrass prairie garden at Albrin Park in Waverley Heights was a volunteer initiative.

What must the neighbours think? Debbie Hemminger has been a resident of Waverley Heights for the past 40 years. She and her family use the park frequently for a variety of activities such as snowshoeing, tobogganing, and cross-skiing in the winter. They enjoy walking through the park in the summer months. “We really appreciate the park and I love the new flower beds, especially the native plants,” says Hemminger. “But if it wasn’t for Debbie and Stuart, this wouldn’t have happened.”

How were the changes at Albrin Park achieved? At times over the past couple of decades, say Debbie and Stuart, trying to navigate the myriad of departments at the city that needed to be approached and the guidelines that needed to be followed so that they could establish new beds and plant trees and perennials presented challenges. But at the end of the day, everyone is happy with the outcome. Debbie and Stuart are thankful for the assistance of many people in various city departments, especially urban forestry and the naturalist services branch, as well as neighbours and master gardener volunteers, all of whom assisted in bringing things together.

Winnipeg city councillor Janice Lukes, who represents Waverley West, has provided compost and bark chips for the new beds, trees, and shrubs. Lukes is also taking steps to resurrect a long-buried water system at Albrin Park. That will be a gamechanger, says Debbie. For now, Debbie, Stuart, Ian, Loressa along with neighbours and master gardener volunteers continue to haul water from their own yards by balancing a 25-gallon jug on a wheeled cart as they have done for many years.

The city offers an Adopt-a-Park volunteer program in which citizens can assist in the enhancement and preservation of local parks and green spaces. There are approximately 45 Adopt-A-Parks in Winnipeg. To learn more, call 311.

“Neighbourhood parks are so important to people’s physical health and mental wellbeing,” says Lukes. “These dedicated residents and volunteers have created a gem.” It takes a village to grow a neighbourhood park. 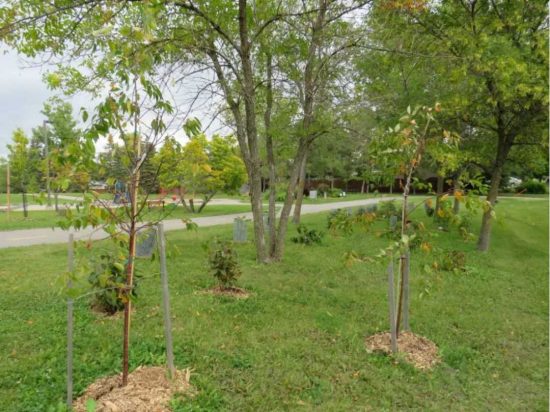 Newly planted trees and shrubs at Albrin Park will provide a windbreak. The area is also the future site for a much needed water supply. 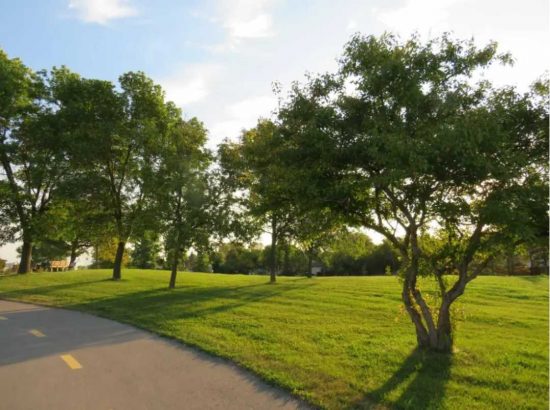 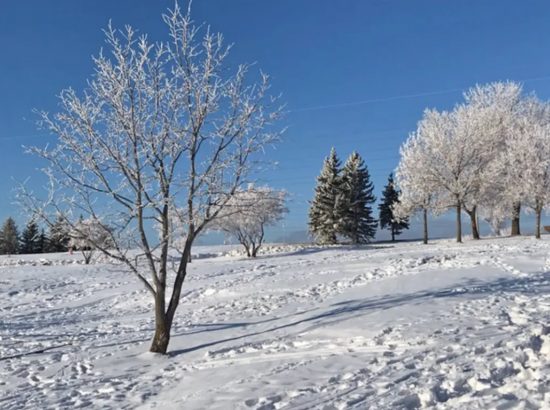 Debbie Innes: Albrin Park is a much frequented place year-round including winter — the footprints say it all.