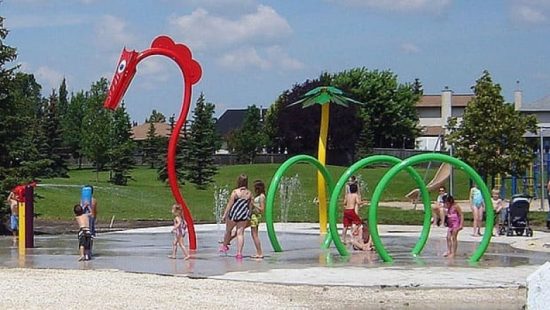 Over the past few years, I’ve been receiving many calls from Whyte Ridge and Linden Ridge residents asking for a spray pad to be installed at Whyte Ridge Community Centre. Following discussions with President Curtis Rossow, the community centre board, and the Public Service, everyone was in support of investigating further. The addition of a spray pad was identified as a need for the growing population of southwest Winnipeg. There are also plans also to include a spray pad into the new South Winnipeg Recreation Campus when it is built in a couple years.

On March 3rd, 2020 I moved $75,000 in funding to have the public service hire a consultant to prepare a preliminary design and plan for the Whyte Ridge Community Centre Spray Pad project. I will keep the community updated on this very exciting project. If residents have any suggestions on water features they would like to see incorporated, please email me! When my kids were little, I think we went to every spray pad park in the city – and we had some favorite water features for sure!

Thank you to the Sou’Wester for covering this important project.

New spray pad in the works for Whyte Ridge

Whyte Ridge Community Centre will receive $75,000 toward planning a spray pad on its grounds, thanks to a land dedication reserve fund from the Waverley West ward of the Assiniboia community committee.

“My first step is to contact the General Council of Winnipeg Community Centres about our plan to have the spray pad put in,” Russow said, adding he’s hoping to have the new facility open in 2023.

Coun. Janice Lukes (Waverley West) said a map of spray pads in her ward showed there was a gap that needed to be filled.

“The site meets many of the criteria for locating a spray pad, including being a multi-use site with access to washrooms, parking and complementary site amenities,” Lukes wrote in the motion, which was passed by the committee on March 3.

“It does help that there aren’t very many other spray pads,” Russow said.

When he first joined the board of the community centre five years ago, the goal was to fund a new gymnasium. But the eight-million-dollar price tag was too expensive.

“Having the spray pad will bring new people into our centre,” Russow said. “We’ll be able to generate some revenue in our canteen.”

Not being able to hold the summer or winter carnival has meant the centre has taken a financial hit during the pandemic. But it is planning to hold soccer programs this summer, as well as children’s camps.

“We’re able to offer programming at 25 per cent capacity now, so our karate program will be one of the first to open up again,” Russow said.