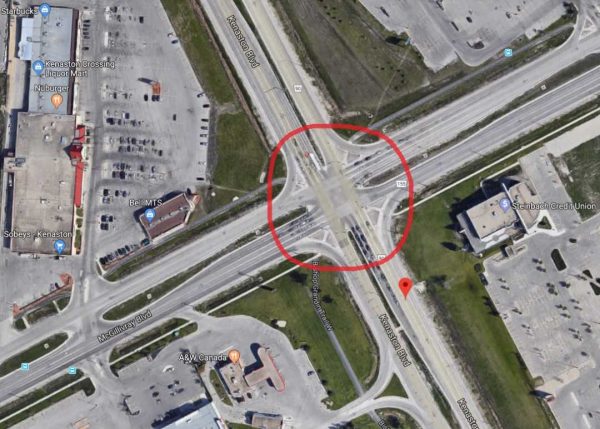 On November 20th, 2018 – The Public Works committee directed the public service to report back on the matter within 180 days (May-June 2019).

WHEREAS in efforts to heighten road safety and reduce collision counts, Manitoba Public Insurance, the City of Winnipeg, the Winnipeg Police Service and CAA Manitoba conducted a two-year pilot program in 2016, designed to enhance motorists’ awareness at high-collision intersections;

AND WHEREAS nearly 10,000 collisions have taken place at Winnipeg’s Top 5 collision intersections over the last decade;

AND WHEREAS signage alerting motorists that they are approaching a high-collision intersection with a secondary message of ‘Don’t Follow Too Close’ was placed just prior to the traffic lights, in all four directions, at Kenaston Boulevard/McGillivray Boulevard and Leila Avenue/McPhillips Street, for the duration of the two year pilot project, and the City’s contribution to this initiative is the intersection signage through Public Works;

AND WHEREAS special enforcement, funded by Manitoba Public Insurance, occurred for the first year of the project at Kenaston Boulevard/McGillivray Boulevard and Bishop Grandin
Boulevard/St. Mary’s Road; AND WHEREAS rear-end collisions accounted for more than 50 per cent of total collisions, according to analysis of collision configurations at four intersections;

AND WHEREAS Manitoba Public Insurance claims collision data (2012, 2013, 2014) also indicated that following too closely is the leading contributing factor at all four intersections;

AND WHEREAS police will provide regular data from each of the intersections they are patrolling on a quarterly basis during the pilot project;

AND WHEREAS speed monitoring will also occur prior, during, and post-campaign to determine what impact the pilot had on driver behavior;

THEREFORE BE IT RESOLVED that the Standing Policy Committee on Infrastructure Renewal and Public Works direct the Winnipeg Public Service to prepare a report summarizing the collected data and the impact the High-Collision Intersection pilot project had on driver behavior.