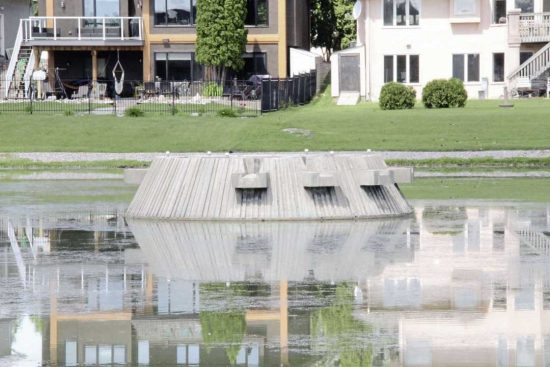 Thank you Winnipeg Free Press – Sou’Wester, CTV and CBC for covering this very important issue on water protection.  Residents wanting to see the fountains turned back on should:

I also encourage you to send an email to these people expressing your concern regarding the budget cuts:

ALSO: I brought forward a motion requesting additional information and will be discussing this publicly at the Water and Waste Committee meeting on July 8th – 9:30 am.

July 8, 2020: City of Winnipeg fountains that were shut down to save money may get to spray once again

As a foul smell rises from retention ponds in Whyte Ridge, residents are raising a stink of their own over the idea that fountains which aerate the water are turned off, possibly for as long as the next four years.

Theresa Sousa met neighbours Rina Monchka and her husband Brad McAllister on the shore of the storm water retention pond in Leon Bell Park on a hot day last Wednesday.  “I’ve lived here 21 years and I’ve never seen the water like this,” Sousa said from the water’s edge where green algae formed a thick, stinking scum. “I’m not letting my dog anywhere near the water. And I worry about those ducks and geese swimming in the water.”

Monchka and McAllister did the same with their two-year-old son, keeping him away from the water, which, as a nearby warning sign noted, had recently been treated with a pesticide.  “We’re working from home, so we’ve been doing daily walks to the park,” Monchka said. “Even compared to last week, the smell has gotten a lot worse. I can’t imagine what July is going to be like.”

Twelve aeration fountains in the city are not being turned on this year, according to information obtained by Councillor Janice Lukes (Waverley West), including three in Whyte Ridge. There are four in Linden Woods and one in south Tuxedo also on the list. Lukes noted there is a difference between a decorative fountain, such as the ones located in Bridgwater Forest, and a fountain that aerates a storm water retention pond. “Why are we turning on the decorative fountains, and not the ones that circulate water in ponds?” she said. Lukes filed a motion at the Assiniboia community committee meeting on June 22, directing the city’s public service to prepare a financial and environmental summary on the additional costs of herbicides and weed removal in storm water retention ponds in the 2020 season that are no longer being aerated due to fountain closures.

Lukes said she has spoken with Coun. Scott Gillingham (St. James), chair of the city’s finance committee, about the monetary cost of these fountains.

“This funding of $80,000 a year, at $7,000 per fountain, has been reduced from the Land Drainage and Flood Control Budget – which is $5,284,000 a year,” Lukes said. “I find it incredible that they cannot find $80,000 a year. And I know there will be additional operating costs if the fountains stay off for four years. For sure there will be damage to the fountain system itself.”  Although Lukes voted in favour of the 2020 to 2023 civic budget, she said there was no information available at the time regarding the aeration fountains. After contacting the water and waste department, she learned that, “The ‘fountain aesthetic maintenance work’ eliminated the annual installation, operation, maintenance, and removal of fountains at the storm water retention basins.”  “This essentially means those storm water retention ponds are going to go bad very, very quickly,” Lukes said. The communication she received from water and waste also read, “This has no bearing on pond health or public safety. Yearly maintenance of the storm water retention basins including herbiciding and harvesting of aquatic/land vegetation to maintain the aesthetic quality of the water and surrounding revetment continues.”

The issue also has Whyte Ridge resident Janet Jones fuming. “Although the fountains are attractive, I feel that they have a very real and important function regarding keeping the ponds healthy,” Jones said. “Moving water means mosquitos don’t lay their eggs there, so (it keeps) the population down in our area. Aeration of the water keeps it healthier and reduces the algae that we are already beginning to see.” When Sousa heard the fountains will not be turned on for four years, she worries the ponds’ water will become dangerous. “A couple of years ago in the North End, there were retention ponds where waterfowl died, possibly due to toxic algae,” she said. “It’s disgusting and it’s going to get worse and become an ugly eyesore,” Monchka added. “It’s also disrespectful to people who pay taxes. Can you imagine living in one of the houses next to the pond, and looking out over the lake when it smells like this?”

Coun. John Orlikow (River Heights-Fort Garry) said he’s keeping an eye on the three ponds in Linden Woods. “There are three floating fountains that I’ve been told have no effect on water quality or algae and smell,” he said, adding that he would look at tapping into the land dedication reserve in the City Centre community committee area to cover the cost, if need be. The fund is normally used to fund tree planting or green spaces.

Whyte Ridge residents have written to city councillors and Mayor Brian Bowman, hoping to receive answers for their questions and concerns, but as of press time on June 26, had not received any responses.