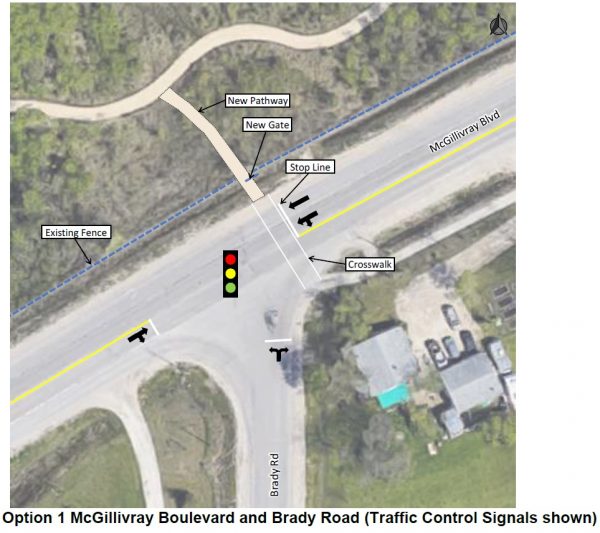 For many years, prior to being elected, as Winnipeg Trails Coordinator, and now as a City Councillor I’ve been working with various groups, and FortWhyte Alive to secure a safe pedestrian crossing from the neighbourhood of Whyte Ridge to FortWhyte Alive.  This connection across McGillivray is also the route of Trans Canada Trail that I re-routed in partnership with the Whyte Ridge Community Center, back in the mid 2000’s – when Nick Barnes was President. A long history here but finally some significant news!

This week (June 1, 2021) Reeve Brad Erb, from the RM of McDonald, confirmed that the Province of Manitoba is installing traffic lights at the intersection of the two new industrial parks at South Landing Drive and McGillivray. McGillivary Blvd. from Kenaston to almost McCreary Rd. is City owned. The Province owns the section from McCreary Rd to the South Perimeter.  The installation of these lights at the industrial parks will change the flow of traffic – in that there will now be breaks in the traffic.

The installation of these lights also triggers the next steps.

Last June (2020) FortWhyte Alive received a federal funding investment of $4.7 million from the Government of Canada’s New Building Canada Fund in support of capital improvement projects to further expand its ecotourism offerings and essential environmental education programs for Manitoba children. In addition, the Provincial government is also contributing funding to the development of a new interpretive centre. Thank you CBC for covering these significant announcements: Funding Announcement FortWhyte Alive is now in the planning stages of the center, and access roads to the center.

The City of Winnipeg is reaching out to FortWhyte Alive to work with them to determine the best area for a pedestrian crossing. The City is proposing to possible options:

I’ve requested multiple studies of this crossing over the years, and in a recent report (June 2020) on the McGillivary and Front Street Crossing, the Public Works department indicates it would be preferable for the pedestrian crossing control treatment to be installed after Manitoba Infrastructure has installed traffic signals at westerly intersections on McGillivray to better understand traffic flows. The installation of lights is now confirmed.  Discussions with FortWhyte Alive will begin to understand their entry plans to the new interpretive center will assist in determining the best possible location.  Once the location is determined, the budget will be identified and I will work with Council and the public service to secure funding.

As you can see in the report – there are many many active transportation pathways from the south wanting to connect into FortWhyte Alive. Many new residents of Waverley West have safe and separate access to this proposed crossing, and, with the establishment of the Pembina Active Living 55+ group in the Whyte Ridge Community Center, many active older adults will be looking to cross McGillivary to access the centre.

As they say – the stars are aligning for this crossing!

We are now closer than ever to seeing a safe pedestrian and cycling crossing – this is exciting news! I will keep posting updates at they unfold! 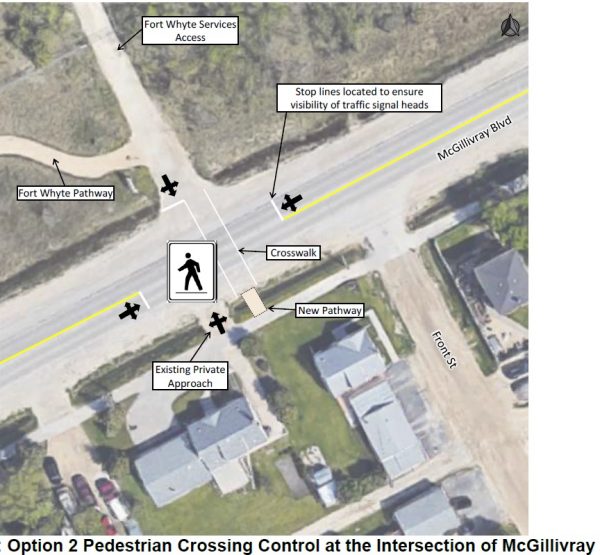